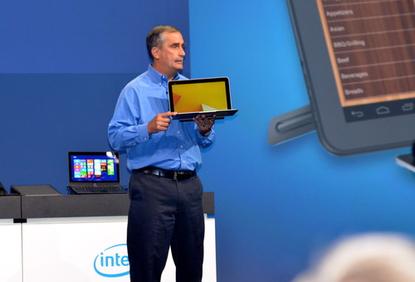 Intel provided a glimpse into the PC future by showing off a laptop based on the Broadwell architecture that is faster and more battery-friendly than current ones based on Haswell processors.

During a keynote at the Intel Developer Forum, Intel CEO Brian Krzanich showed the thin-and-light laptop running a gaming application, and it looked much like the ultrabooks currently available from top PC makers.

Krzanich hinted that the Broadwell PCs could arrive in the second half of next year, but didn't provide an exact date.

Core chips based on Broadwell will be 30 percent more power efficient and faster than their Haswell counterparts, Krzanich said. Analysts have estimated CPU performance improvements in Haswell at 10 percent to 20 percent compared to previous Ivy Bridge chips.

Krzanich admitted that the PC market is changing with the popularity of tablets, and one of Intel's goals with its upcoming PC chips is to extend battery life as much as possible.

"Fourteen nanometers is here, it is working, and we will be shipping by the end of this year," Krzanich said. The first 14-nm Broadwell chips will likely go into low-power Xeon server chips and then to PCs.

Intel is trying to grow its participation in the tablet market and will announce new Atom tablet chips code-named Bay Trail on Wednesday. The Bay Trail chips will go into tablets priced under $99 by the end of this year, Krzanich said.