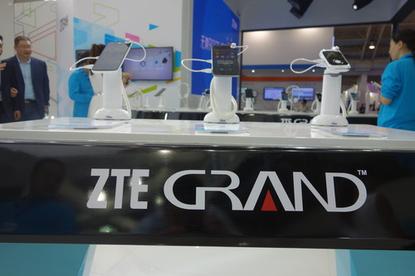 ZTE will begin selling its Grand S and Nubia smartphones in the U.S. in Oct.

ZTE plans on launching another phone running Mozilla's Firefox OS, this time with a dual-core processor, a bigger screen, and a revamped user experience, a company executive said on Tuesday.

The Chinese handset maker has so far sold about 100,000 of its first Firefox OS phone, the ZTE Open, said He Shiyou, the company's executive vice president. The low-end phone was built for developing markets such as Latin America, but later made available in the U.S. and U.K., where it quickly sold out at prices of $79.99 and £59.99, respectively.

The phone's sales volume is small compared to the millions of Android handsets and iPhones that fly off store shelves weekly, but ZTE has been pleased with the initial demand, and hopes sales will eventually reach 200,000 units, He said in an interview with journalists.

"On the whole, the sales have been pretty good, especially on eBay and with third-party retailers," he said. "The demand has exceeded supply, but we also purposely did not want this first generation product to have a large scale."

ZTE's next Firefox phone will arrive in the first half of 2014, and remain priced at the lower end. The Chinese company largely sells Android handsets, but has high hopes the Web-based Firefox operating system will eventually go mainstream.

"These Web-based OSes will develop fast, particularly because of 4G LTE technology," he said. Higher-speed networks means that HTML5-based apps can load quickly on phones, removing the need to download and install native apps, He added.

"In the future, the app store business model will be no more," he said. "The Firefox OS is still new, and it will bring an entirely different user experience."

ZTE was ranked as the world's fifth-largest smartphone vendor in the second quarter, according to research firm Gartner. But the company is not widely known in the U.S., where it generally sells unbranded versions of its phones with local carriers including AT&T and Sprint.

But starting in October, ZTE will begin selling its Grand S and Nubia phones in the U.S. through retailers.

The Grand S, launched in China earlier this year, is an Android phone with a 5-inch full-HD screen. It has a quad-core processor, 13-megapixel camera, and its U.S. edition will probably come with a 2300 mAh battery. The price will range between US$400 and $500 when bought without carrier subsidies.

ZTE's Nubia Z5, another Android phone, features similar specs with a 5-inch full-HD screen and a quad-core processor. Its price will range around $450.

For this year, the company is aiming to grow its U.S. handset revenue by 60 percent year on year to around $1.6 billion.