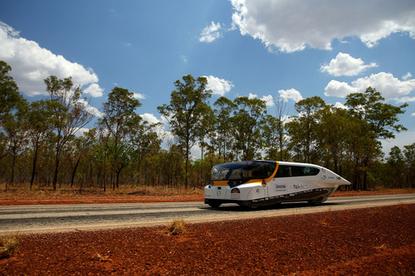 Nuna 7, a futuristic single-seater car capable of speeds in excess of 100 kilometers per hour, is on the verge of winning the World Solar Challenge, a biennial cross-Australia endurance race for solar-powered vehicles.

The vehicle, developed by Delft University in the Netherlands, ended the fourth day of racing 20 minutes ahead of the team from Japan's Tokai University. That's exactly the same gap that existed between the two teams at the end of day three, and now there's just a few more hours of racing to go.

The cars are 300 kilometers away from the finish line in Adelaide, and organizers expect them to cross the line in the middle of Thursday morning there. That distance leaves Tokai little chance of overtaking, unless Nuna 7 suffers problems.

Delft was crowned the champion in four successive races, from 2001 to 2007, with Tokai stealing the crown in the past two events, so this year's race pits the two historically most successful teams against each other.

The gap between the two leaders and third-placed Solar Team Twente, also from the Netherlands, has now widened to 240 kilometers. There's a battle for third place with the team from Stanford University just nine kilometers farther back.

In the cruiser class, a new section of the race that awards points based on the practicality of the cars and the number of passenger kilometers completed, the University of New South Wales is now in the lead, about an hour ahead of the Hochschule Bochum Solar Car Team.

Yesterday's leader, the Eindhoven University of Technology, is now more than an hour behind the leader, but the class is about more than just speed. Because the Eindhoven car has been carrying up to four passengers, it could end up winning the class because its passenger kilometer score will be much higher.

The race tests the solar car design process in addition to vehicle performance in some of the harshest conditions in the world.

In developing the B7 Blue Sky Solar Car, the 50-student team from the University of Toronto managed to go from design to testing in just over a year. It had taken as long as four years to design and develop solar cars in the past, but the team used the 3DExperience software from France's Dassault Systemes to help speed up the process.