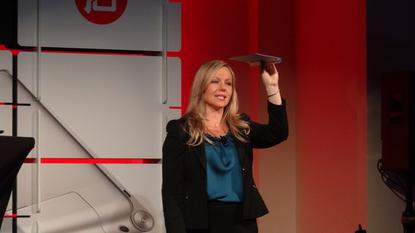 Lenovo is claiming that its new Yoga tablets will offer 18 hours of battery life when browsing the web, which would be the longest when compared to other tablets.

The company's new Yoga tablets, which will come in 8-inch and 10.1-inch versions, will provide 12 to 14 hours when watching high-definition video, said Stephen Miller, Lenovo ambassador. The tablets were announced at a launch event in New York.

The battery life can be even longer if the tablets are set to low screen brightness, Miller said.

The 8-inch tablet, which is priced at US$249, weighs 400 grams. The 10.1-inch tablet is at $299 and weighs 603 grams. The tablets will run Android 4.2 and be available in the U.S. on Wednesday. The company did not comment on worldwide availability.

The battery is housed in the tablet's circular base, which makes it easier to grip the device. A kick-stand allows the tablet to sit firmly on the table.

With a circular base, the Yoga tablets bears a resemblance to Notion Ink's now-defunct Adam tablet, which was one of the first Android tablets to ship when it became available in late 2010.

The Yoga tablets run on MediaTek quad-core processors with a clock speed of 1.2GHz. Both of the tablets display images at a resolution of 1280 x 800 pixels.

Other features include a 1.6-megapixel front camera, a 5-megapixel back camera, up to 32GB of internal storage, and micro-SD card slot for expandable storage.

Lenovo has introduced a range of tablets, PCs, and hybrids in the last few years. The new products are important as buyers move away from PCs to mobile products.

"We shipped more smartphones and tablets than PCs," during the third quarter, Miller said.