An iPhone photo allegedly taken by one defendant showed $800,000 packed into a suitcase 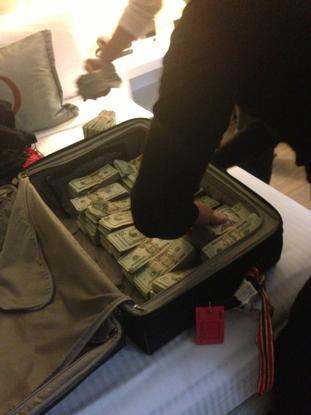 One of the defendants, Saul Franjul, allegedly took a photo on his iPhone of $800,000 in cash stuffed into a suitcase, intended for delivery to another member of the group.

Six more alleged participants were arrested Monday in a US$45 million global ATM fraud, including one man who was photographed stuffing $800,000 into a suitcase, federal prosecutors in New York said.

The defendants are alleged to be part of a New York cell that used bogus payment cards to withdraw millions of dollars from more than 100 ATMs in a matter of hours, according to the U.S. Attorney's Office for the Eastern District of New York.

Defendants Anthony Diaz, 24; Saul Franjul, 23; Saul Genao, 24; Jaindhi Polanco, 29; and Jose Angeley Valerio, 25, pleaded not guilty to charges of conspiracy to commit access device fraud, according to a spokesman for the U.S. Attorney's Office. They face a possible seven-and-a-half years in prison. A sixth defendant, Franklyn Ferreira, was arrested later on Monday but had not been arraigned, the spokesman said.

Hackers raised the withdrawal limits on the cards after breaking into prepaid Visa and MasterCard credit card processors in the U.S. and India, which handled transactions for the Bank of Muscat, based in Oman, and the National Bank of Ras Al-Khaimah PSC, also known as RAKBANK, in United Arab Emirates.

The style of attack is known as an "unlimited operation," prosecutors said. Neither of the prepaid debit card processors has been identified.

The Bank of Muscat lost $40 million in February when criminals made withdrawals, prosecutors said in May when they announced the first indictment.

Franjul is alleged to have packed $800,0000 cash in a suitcase and given it to co-conspirators who then boarded a bus for Florida. The cash was to be delivered to Alberto Yusi Lajud-Peña, one of eight people indicted in May, but who was subsequently found to have been murdered in April in the Dominican Republic.

The attorney's office released an iPhone photo taken by a co-conspirator that allegedly shows Franjul handling the cash. The New York cell spent proceeds from the heists at high-priced nightclubs and on luxury cars and watches, prosecutors allege.

Two other photos provided by the attorney's office showed a Facebook post with expensive bottles of alcohol and a receipt for more than $4,000 worth of booze purchased at a New York lounge.

The New York cell is alleged to have withdrawn $2.8 million of RAKBANK's money in thousands of transactions from 140 ATMs around New York, sending the bulk of it to organizers of the attacks.

Of the eight people indicted in May, four have pleaded guilty to charges related to the thefts, and three others remain charged under a superseding indictment released Monday, prosecutors said.