The flagship Asha 503 model is available in countries such as France, Italy, the UK and Portugal 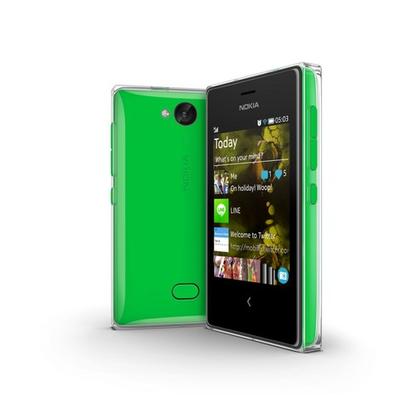 Nokia has started shipping two new low-end touch-screen phones running its own Asha software platform. It hopes they will allow it to compete more effectively with cheap Android-based products.

The Asha 503 is available in countries such as France, Italy, the UK and Portugal. Other countries are expected to follow in the coming weeks. Nokia will announce more specific dates later locally, it said. The main markets for the Asha 502 will be India, the Middle East and Africa.

The Asha 503 3G phone is the new flagship model of the family and will cost US$99 before taxes and subsidies. It has a 5-megapixel camera and a 3-inch screen protected by Corning's Gorilla Glass 2.

The dual-SIM Asha 502 has the same screen size and camera resolution as the 503, but no 3G, which helps make it $10 cheaper.

When Nokia announced the two phones in October it also added the 500 model to the Asha line-up. That device has a 2.8-inch screen and a 2-megapixel camera. It costs $69 before taxes and subsidies and will start shipping before the end of the year.

The three phones all use an updated version of the user interface Nokia announced on the Asha 501 earlier this year.

Users can swipe on the screen to start the camera; long press to access camera settings, and swipe to switch from the image mode to the video mode or vice versa. A key feature in the Asha user interface is Fastlane, which shows recently accessed contacts, social networks and apps. It can now be personalized by users, who can choose what content they want it to show.

Nokia has also updated the Asha 501 with the same features.

Nokia's shareholders last week voted to approve Microsoft's acquisition of the company's Devices & Services business. The deal is expected to close during the first quarter of next year.

What will happen to the Asha family when Microsoft takes over remains to be seen. However, as long as Microsoft can't offer Windows-based phones below $100 without a contract, it makes sense to keep the Asha family because of the growth seen in this segment of the market. But its number one priority should be to bring down the cost of Windows Phones to that level, according to Pete Cunningham , principal analyst at Canalys.

CCS Insight believes that Microsoft will get rid of the non-Lumia part of Nokia's handset business by the end of next year, it wrote in a recent report. But the company will keep much of the Asha handset organization to help drive Windows Phone to lower price points, it said.