Acer cashes in on Chromebook craze with new laptop 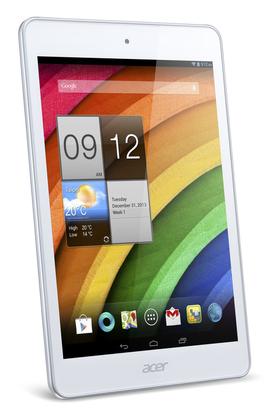 Chromebooks are gaining popularity at the expense of Windows machines, and Acer is cashing in with a touchscreen laptop based on Google's Chrome OS.

Acer's new Chromebook C720P-2600, which has an 11.6-inch touchscreen and runs on Intel's dual-core Celeron 2955U chip based on the Haswell architecture. The laptop is 19 millimeters thick, weighs 1.35 kilograms and delivers 7.5 hours of battery life, the company said.

The US$299.99 laptop will be available in the second week of January. It will be shown at Pepcom's Digital Experience event on Jan. 6 in Las Vegas, one day ahead of International CES trade show.

Chromebooks are for those who rely on the Internet for computing and storage. Chromebooks accounted for 21 percent of commercial laptops shipped in the U.S. last year, according to NPD, and Acer's C720P model is one of the biggest-selling laptops on Amazon.com.

Chromebooks have done well because they target the needs of customers who depend on collaboration and cloud computing, said an Acer spokeswoman in an email. Acer also wants to give users a choice in OSes from Microsoft and Google, the spokeswoman said.

Acer now has nine Chromebook C720P models, including two with touchscreens. But the Chromebook market is getting competitive with Dell, Hewlett-Packard, Samsung, Lenovo and others offering laptops with Chrome OS.

The success of the Chromebook C720P is a bright spot for the otherwise struggling Acer, which is restructuring operations and has seen a flurry of executive departures in recent months. Acer's new CEO, Jason Chen, formerly a Taiwan Semiconductor Manufacturing Co. executive, started on Jan. 1 following the departure of J.T. Wang in November, and his replacement, Jim Wong, just 15 days later. The departures were triggered by poor laptop sales and financial struggles.

Acer's new Chromebook has minimal storage at 32GB, but has a USB 3.0 port to attach a portable storage drive. The laptop will come with 100GB of storage for two years on Google's online storage service called Google Drive. Other features include a webcam, Wi-Fi, an HDMI port, an SD card slot and 2GB of DDR3 memory.

The Iconia A1-830 has a "premium" design, according to Acer, but the tablet's hardware specifications are comparable to other tablets found in the sub-$200 price range. The tablet offers around seven hours of battery life and has an Intel Atom Z2560 processor code-named Clover Trail+. The screen can display images at a 1024 x 768-pixel resolution. Other features include a 1080p rear camera, 720p front camera, microUSB 3.0 slot and Bluetooth 3.0.

The Iconia B1 is among the cheapest tablets offered by Acer. The tablet has 1024 x 600-pixel screen, 8GB of storage, a front camera, a dual-core MediaTek ARM-based processor, 1GB of RAM, and Bluetooth 4.0. The tablet offers five hours of battery life.