Everyday objects get connected in 'Internet of things'

From Internet toothbrushes to stick-on sensors, gadgets and wearables are getting connected. 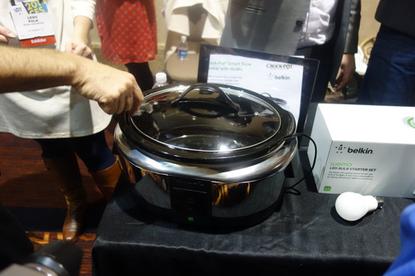 If you aren't already deluged with information from your email, social media, and websites, how would you feel if your appliances and gizmos start sending you messages?

The so-called "Internet of things" is an envisioned network of interconnected objects, where everything from office supplies to refrigerators will have an online presence. While consumers have been keen on connected cars, fitness trackers, and smartwatches, getting them interested in other linked tools will likely be more of a challenge.

At CES 2014, tech vendors are trying to stoke some Internet of things fires. Belkin announced an app-controlled slow cooker developed with Crock-Pot. Users can turn the cooker on or off, set timers, and adjust the temperature -- all via their smartphone and Wi-Fi or 3G/4G networks. The cooker hits U.S. stores this spring for US$99, and Belkin wants to launch other connected, phone-operated products such as air purifiers.

Meanwhile, French startup Sen.se showed off a home network led by Sense Mother, a hub that looks like a sleek white Russian doll, and small sensors called Motion Cookies. The Cookies can be stuck on anything from a backpack to a baby crib to a pill container, and relay data such as whether objects have been moved or used, the local temperature, or whether you've walked enough steps each day.

The Sense network picked up a 2014 International CES Innovations Award in the category of Technology for a Better World, and ships this spring for $222, which gets you one Mother and four Cookies.

Also from France is Kolibree, an Internet-connected electric toothbrush that packs a gyrometer and accelerometer to measure how effectively users brush their teeth. The data it gathers can be uploaded to a smartphone via Bluetooth and an associated app tells you whether you've brushed long enough and reached the hard-to-get areas of your mouth. It gives you a score that you can share with others -- just in case your dentist doesn't nag you enough.

Other companies are bringing connected thermostats, sports gear, and wearable technology to market, but whether consumers actually want to use them or deal with the constant stream of data they will generate is another question. In a Forrester Research poll cited by The Wall Street Journal in an article this week, some 53 percent of Americans were not interested in controlling appliances with a smartphone.