The device would measure glucose levels using the wearer's tears 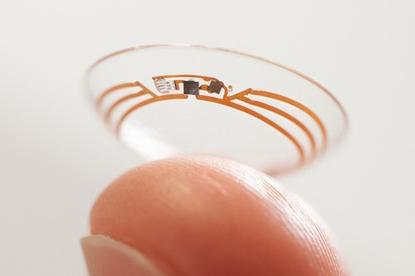 Google says it's testing a contact lens that would use tears to measure glucose levels in people with diabetes.

Google is testing a high-tech contact lens for people with diabetes as an alternative to finger pricks for glucose testing, the company said on Thursday.

The device would measure glucose levels in people's tears using a tiny wireless chip and a miniaturized glucose sensor, Google said. Google said it was in discussions with the U.S. Food and Drug Administration about the device, and that the company had completed multiple clinical research studies to refine a prototype.

Theoretically, such a device would take some of the pain out of the traditional method of using finger pricks, but still provide useful information, because glucose levels in tear fluid correspond to those in the blood, researchers have said.

The device, should it ever become a commercial product, would move Google even further away from its roots as an online software company -- something that many feel has already happened, especially given this week's acquisition of thermostat maker Nest.

Such a device could also make hardware like Google's Glass head-mounted computer system much more than a plaything for techies, if Google ever chose to make the two work together.

Google said it was on the hunt for partners that could use the technology and develop software to make the measurements, then provide them to the wearer and his or her doctor.

"We plan to look for partners who are experts in bringing products like this to the market," said Brian Otis and Babak Parviz, two of the project's co-founders, in a blog post.

The project comes out of Google's usually highly secretive Google X facility, which rumors have tied to such wild ideas as cable-based space elevators and Internet-delivering hot-air balloons.

With a tear-sensing contact lens, Google is entering an already active field of research. High-tech lenses for monitoring glucose levels have been in development for at least a few years. At the University of Washington in Seattle, Parviz had been working on the technology at least as far back as 2011, judging from an article in The Economist.

It appears, therefore, that Google saw with its own eyes something special in Parviz's work.