Connected clothing can tell how soundly your baby is sleeping 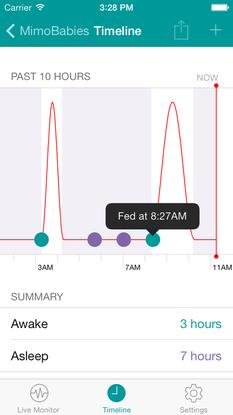 The Mimo baby monitor from Rest Devices sends information like the baby's position to a parent's smartphone.

Singing along to the Disney movie playing in the background, Dulcie Madden helped hand-package thousands of high-tech baby clothes from her start up in Boston's Leather District. Madden is the CEO and co-founder of Rest Devices, which just last weekend started shipping its Mimo connected "onesie" to stores across the US. The $200 system aims to help anxious parents by monitoring a baby's movement, respiration, position and skin temperature and delivering the information with audio to smartphones.

"The green stripes on the front of the onesie are the respiration sensors, which pick up the baby's breathing throughout the night or as they're playing," Madden said. The green plastic turtle that attaches to the onesie has a temperature sensor, accelerometer and Bluetooth low-energy chip to deliver the information to the "lily pad," which acts as a bridge between the onesie and the home's WiFi network.

"We basically designed it because we had parents coming to us saying 'I wake up over and over in the middle of the night because I'm wondering if everything is okay with my baby,'" Madden said. "It's really there to be an extra tool for parents."

Along with co-founder Thomas Lipoma, Madden leads a group of seven young employees, all but one of whom hail from The Massachusetts Institute of Technology. In a loft style office that Rest Devices shared with a custom tailoring company, the group developed, prototyped and began manufacturing Mimo.

"Since we started working on the baby monitor, we had three competitors pop up," said Madden, citing the ability to rapidly prototype as an advantage. Rest Devices has a Makerbot Replicator 2 3D printer and a desktop injection molder on site. Lipoma uses a suite of software from Autodesk to design the 3D models, which are then sent to the 3D printer.

"If we have a first concept, we're going to immediately CAD it," said Lipoma. "Within half and hour we can have something up. We can print it. We can feel it."

In December Intel invited Rest Devices to join the chip maker on stage at its CES keynote in January 2014. The Mimo turtle will eventually use Edison, an Intel chip that is a computer the size of an SD card. Currently, the team uses a homemade version since Edison won't be available until later this year.

With the exception of the onesie, which comes from India, all of the components of the system and the assembly is done in Massachusetts and New Hampshire. For durability testing, the team 3D-printed a contraption that used a small motor to restart a washer and dryer.

"If you think about washing a thousand onesies hundreds of times, that's a lot of laundry. So we added servos to the washer and dryer so that they'll automatically restart and run on self-cycled water."

They also modified another 3D printer so the process of applying the silver paste, for use in the respiration sensor, can be automated.

The first few thousand units are being hand assembled by the team in the Boston office, after which manufacturing and assembly will move one state north to New Hampshire.

The company's next project is a connected bottle warmer. The idea is that when a baby wakes up in the middle of the night, the Mimo onesie sends a signal to the bottle warmer to start warming the baby's milk.

After that they're looking to help parents with potty training.