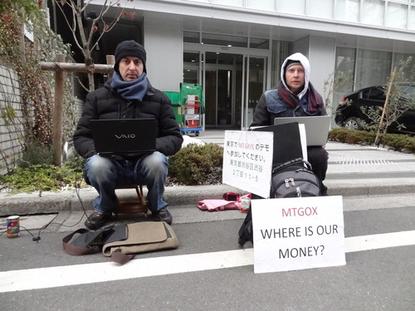 A small protest at Bitcoin exchange Mt. Gox in Tokyo marked seven days on Thursday, with demonstrators saying they want to ensure their bitcoins are safe.

The protesters began their demonstration last Friday and are demanding answers about getting access to their bitcoins on the exchange.

Citing a technical issue with the Bitcoin protocol that could allow fraud, Mt. Gox on Feb. 7 suspended bitcoin transfers to external addresses, a move that was followed by a plunge in the value of the digital currency.

"There is a minor technical glitch with Bitcoin and it is not a major security flaw. It does not prevent the ability to transmit the bitcoins," said Aaron, a Tokyo resident who asked that his last name not be used.

Both Aaron and Kolin Burges, who flew to Japan from London to protest, said they have hundreds of bitcoins each in Mt. Gox and cannot get them back.

"A lot of my future is tied up in the money that's inside Mt. Gox," said Burges, a former software developer. "I was in a kind of semi-retired state, speculating on coins. If those coins disappear, I'll have to think more about bringing money in through other means. It wouldn't be very good for me."

A third man who joined the duo on Thursday afternoon sported a silver mask and yelled "Where is our bitcoin?" in Japanese.

The protesters were streaming live their curbside vigil outside the offices of Mt. Gox owner Tibanne in Tokyo's Shibuya district.

Tibanne, which is headed by CEO Mark Karpeles, did not respond to interview requests. Karpeles has told The Wall Street Journal that customer-related questions are confidential.

Meanwhile, a notice on the Mt. Gox support site said the exchange has moved to the 15th floor of Cerulean Tower, also in Shibuya.

The 15th floor is home to a company hosting "virtual offices." A woman who answered the phone there said the company cannot discuss its tenants.

On Monday, Mt. Gox said it is continuing to implement a solution to the technical issue, known as "transaction malleability," that will prevent any fraudulent exploitation of bitcoin transaction records.

It promised withdrawals would resume soon, and an update "by Thursday at the latest." None was posted at time of writing.

The situation has led to speculation on online forums that Mt. Gox will collapse.

The fears have been reflected in the value of the bitcoin trading on the exchange. It touched a low of US$134 on Thursday before recovering to around $180, far below around $600 on other exchanges, as cited by CoinDesk.com.

The protesters said Mt. Gox has refused to tell them whether it has all the bitcoins it's supposed to have.

"It does seem very clear that there needs to be more regulation of the bitcoin exchanges," said Aaron, "at least with respect to protecting people's funds and having transparency and ensuring that there's no insider trading."

He said he intends to maintain the protest until he gets convincing answers from Mt. Gox.