Huawei unveils 8in tablet ahead of Mobile World Congress 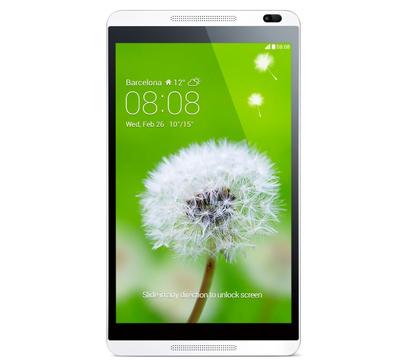 Chinese smartphone maker Huawei has unveiled an 8in tablet ahead of Mobile World Congress in Barcelona.

Huawei’s MediaPad M1 is an 8in tablet that has a body made from aviation aluminum metal. Its IPS screen has a 800x1280 resolution, is bordered by a thick black bezel and it features front-facing speakers. .

Between the aluminum body, black bezel and front facing speakers, it’s hard to deny the M1 bears some resemblance to the HTC One.

The 8in tablet is 8mm thin and weighs “about 329g”. It runs Huawei’s custom skin on-top of the Android 4.2 Jelly Bean operating system. The software is a bit of a let down considering the latest version of Android is 4.4 KitKat.

A look over the tablet’s hardware and we get the inkling the MediaPad isn’t a market leading device. Powering the tablet is a quad-core 1.6GHz CPU, 1GB of RAM and a 4800mAh battery. There’s 8GB of internal storage which can be expanded through a microSD memory card by 32GB.

Rounding off the tablet are a rear 5MP camera capable of Full HD video recording and a front 1MP camera.

Four versions of the MediaPad M1 will go into development and it is unclear if the MediaPad reaching Australian shores will support 4G, as pricing and availability has yet to be revealed.