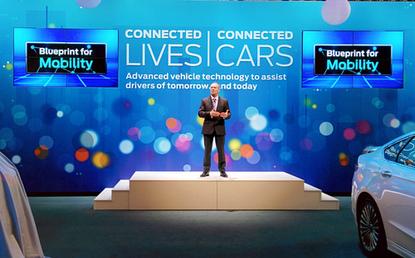 If you're bad at parking your car, whether it's parallel, perpendicular, backing in or backing out, Ford says its new Focus has technology that can help.

The car, which is the best-selling vehicle in Ford's line-up, will go on sale in the third quarter of this year in Europe and was unveiled on Monday at the Mobile World Congress expo in Barcelona.

Ford's choice to reveal the car for the first time at the event, which is the world's biggest mobile telecom trade show, highlights the increasing importance of technology in automobiles. Ford said the new car is the most advanced Focus yet.

A parking assist feature is available on current Ford Focus models that goes some of the way towards automating parallel parking. Sensors mounted on the car automatically control the vehicle and guide it into a space while the driver controls the gas and brake.

The new Focus has two additional sensors at the rear that bring partially automated perpendicular parking -- that's when you drive or back into a space to end perpendicular to the curb, as typically happens in a car park.

The new sensors also enable a system that warns drivers if cars or pedestrians are about to cross behind them when the car is in reverse. There's also a new feature that partially automates the backing out from a perpendicular space.

The car will also be the first from Ford in Europe to feature Sync 2, an updated version of Ford's in-car connectivity and entertainment system. Based around an eight-inch display, Sync 2 offers voice control of the audio system, navigation and climate control.

And for parents who let new drivers, typically their children, drive their car, there's a system called MyKey. It restricts the top speed and maximum volume of the audio system when a certain key is used to start the car. If the driver and passengers are not using seat belts, the audio system won't play at all. It can also be used to block deactivation of safety technology systems.

Auto makers are increasingly developing and installing advanced technology systems into cars. While most of the tech in cars was originally centered around the entertainment system, in recent years the miniaturization and lower cost of radar units and electronic control systems has enabled a host of new safety features that work to prevent collisions, especially those that occur at speed.