Huawei steps up its game with the 7in MediaPad X1

An aluminum alloy unibody, a Sony 13MP camera and enough computing guts to play with the big boys. 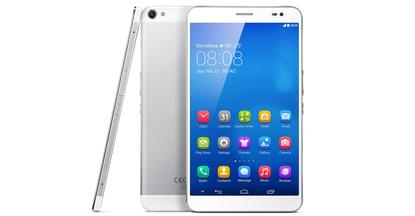 Chinese telecommunications company Huawei has taken the wraps off a premium 7in Android ‘phablet’ that could serve as a genuine alternative to Samsung’s Galaxy Note series.

The company unveiled the 7in MediaPad X1 at the Mobile World Congress (MWC) in Barcelona, alongside the low-end MediaPad M1.

The MediaPad X1 represents Huawei’s attempt at making headway in the premium ‘phablet’ market. The 7in screen has a resolution of 1920x1200, can recognise 10 points of contact and has a near blinding screen brightness of 550 nits.

The body is crafted from a single aluminum alloy. It’s just 7mm thick and weighs a light 239 grams.

And it doesn’t compromise on hardware either by packing a Kirin 910 quad-core 1.6GHz CPU, 2GB of RAM and a 5000mAh battery. There’s 16GB of on-board flash storage and it can be expanded by an additional 32GB with a microSD memory card.

Huawei has turned to the professionals for the MediaPad X1’s rear camera. It is from Sony, has 13 megapixels and can record video at 1080p resolution. Even the front-facing camera rates well with 5 megapixels.

Unfortunately the MediaPad X1 runs an older version of software. Android’s 4.2 Jelly Bean is what the company has gone with, and this is in a climate where most smartphones unveiled at MWC operate on 4.4 KitKat. In the case of the MediaPad X1, the software will determine if it is a success or a failure.

Huawei has not provided local availability or pricing for the MediaPad X1. Stay tuned for updates.