AMD's new Sempron chips could go into systems starting as low as $60. 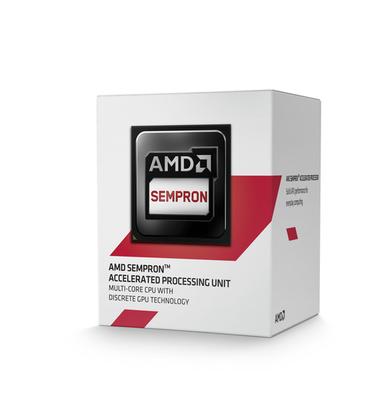 Advanced Micro Devices' Sempron processor brand has polarized chip fans since its 2004 introduction in laptops, but a fresh batch of the processors is being targeted at its desktop fan base.

AMD's Sempron chips will go into low-priced desktops priced at up to US$399. Barebones desktops could be built starting at $60 with just a Sempron chip and motherboard, said Adam Kozak, desktop product marketing manager at AMD.

The company also introduced new Athlon chips, which are usually more feature-packed and expensive than Sempron. Both the chips have been updated with the latest Jaguar microarchitecture and Radeon GCN (graphics core next). The new chips will support up to four CPU cores, 16GB of memory and USB 3.0.

Sempron is at the lowest rung of AMD's chips and in its decade of existence has been derided for poor performance. But it has found a niche among buyers looking for inexpensive PCs and is used in some of the cheapest laptops and desktops that ship today.

AMD remains unfazed by Sempron's reputation. The new desktop chips are targeted at the Latin America, and the Asia-Pacific and Japan markets, where budget buyers shop for parts and build systems at home.

"On desktop we realized there is a lot of cachet over the brands that have served us well," Kozak said, adding that FX chips for high-end desktops are also among those brands.

Sempron has been trailing off in volume shipments, but chips with the latest processor cores could inject new life into the brand, said Dean McCarron, principal analyst at Mercury Research.

"The existing Sempron products have aged," McCarron said. "If they wanted to keep Sempron around they needed a product refresh."

AMD's Kozak said Sempron is an alternative to AMD's chips that are integrated directly on the motherboards. The new Sempron and Athlon chips are socket-upgradeable.

"We're going to have a nice road map for this socket," Kozak said.

A low-end part like Sempron is necessary for PC buyers who are "hyper-sensitive" on price, McCarron said. The popularity of Sempron has tailed off in mature markets where preconfigured systems are bought directly from vendors, and people don't do socket upgrades, McCarron said.

Sempron will compete with Intel's latest Atom, Pentium and Celeron chips code-named Bay Trail, which have started appearing in low-cost desktops and laptops.