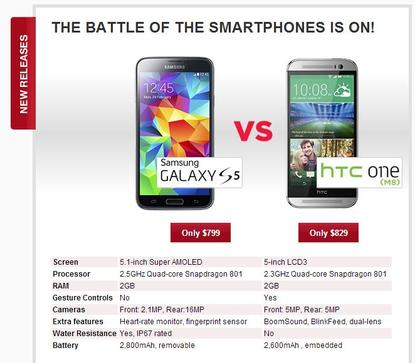 Many of the specs listed are incorrect: Kogan is offering an 8-core S5; the One (M8) has a 2.5GHz CPU and a rear 4MP Ultrapixel camera.

Two of the hottest smartphones this year have been priced by etailer Kogan, the Samsung Galaxy S5 and the HTC One (M8)

Samsung’s recommended price for the Galaxy S5 is $929, but it appears Kogan can afford to drop the pricing of the Galaxy S5 by offering the overseas variant. The G900I is a Galaxy S5 with an Octa-core CPU, but as far as we can tell, this comes at the expense of 4G connectivity.

The HTC One (M8) is priced less competitively by the etailer. Kogan is offering the smartphone for $829, which is below HTC’s recommended retail price of $899. The HTC One (M8) features a 2.5GHz CPU and a rear 4MP Ultrapixel camera, despite the newsletter stating otherwise.

Samsung’s Galaxy S5 will be available in stores in just a few days on 11 April. HTC’s flagship One (M8) has already been released.

Update, 10 Mar: Kogan has lowered the price of the 4G Samsung Galaxy.