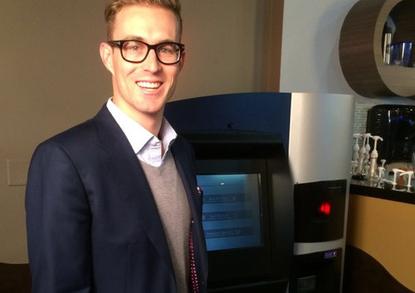 Jordan Kelley, CEO of Bitcoin ATM maker Robocoin, introduces the world's first Bitcoin ATM in Vancouver, Canada, in 2013. The manufacturer is adding bank-style functions to its kiosks in a bid to broaden the appeal of the cryptocurrency.

Leading Bitcoin ATM manufacturer Robocoin is upgrading its network of machines with bank-style features, including the ability to send funds to phone numbers.

The Las Vegas-based company, which launched the world's first Bitcoin ATM in Canada last October, said its ATMs in 13 countries will allow users to buy bitcoin or get cash in 12 currencies easily.

It's billing the new Robocoin Bank as "the fastest way to send cash worldwide."

The ATM services, which will launch this summer, will include the ability to store, access and send bitcoins from any ATM, or "branch," as the company is now calling them. They can also transfer bitcoin instantly without users having to wait for confirmation on the blockchain, the public ledger of transactions in the cryptocurrency.

The machines will also let customers withdraw cash from their bitcoin holdings.

In a move the company believes will disrupt the remittance industry, users will be able to send money to people by addressing it to a phone number instead of a Bitcoin address. If recipients don't have Bitcoin accounts yet, the funds will wait for them at their local machine.

For security against fraud, the ATMs will use three ways to authenticate users: a phone number that acts as a username, a PIN and palm-vein scans.

The manufacturer is hoping its revamped approach, as well as use of banking terms like "deposits" and "withdrawals," will broaden the appeal of Bitcoin beyond early adapters.

"The new Robocoin Bank removes the pain and the barrier to entry," Robocoin CEO Jordan Kelley wrote in an email.

"No longer do customers have to worry about private keys and public addresses. With the Robocoin Bank, customers deposit into their Robocoin Account and send money between phone numbers, not public keys, which will yield incredible network effects."

Bitcoin transfers have relied on public-key cryptography, which uses secret codes to verify a user's ownership of bitcoins. Private keys are matched to Bitcoin addresses, unique identifiers that allow users to receive the digital currency.

The Robocoin Bank will enable faster and easier transactions than before, Kelley added.

Robocoin did not immediately respond to a request for information about the bank's fee structure.

Japan become one of the latest countries to receive a Robocoin ATM when importing company Raimu unveiled in April the first of three it ordered from the U.S.

The machine is expected to be set up in the busy Shibuya district of Tokyo this month, according to Raimu.