Cisco may be bouncing back, but can Chambers hold on? 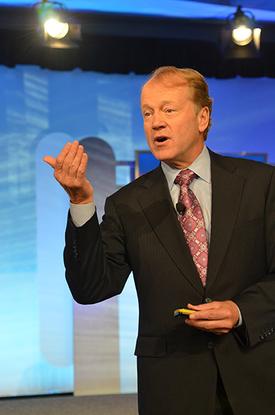 John Chambers may stay chairman and CEO of Cisco Systems for the time being, but with the company's financial results just beginning to emerge from a slump and major challenges remaining, it won't be an easy time to hold onto one of the longest leadership stints in the IT industry.

In its latest financial report , Cisco again reported revenue and profit below 2013 levels. The gap narrowed from the previous three months and from Cisco's own forecast, but executives said steady growth won't resume for a few quarters yet. In December, Cisco dramatically cut its long-term forecast.

There are also big changes happening in the technology landscape. Cisco is battling a growing trend toward SDN (software-defined networking), an emerging set of technologies that offer an alternative to Cisco's traditional model of selling hardware with built-in software.

At the same time, the expected proliferation of connected devices in the Internet of Things could fuel a new era of growth in networks -- and at Cisco, if the company plays it right. With a growing server business and moves into security, cloud and other areas, the company has also set its sights on a wider IT market, taking on the likes of IBM and Hewlett-Packard.

Chambers, who will turn 65 this year, has said he wants to guide the company through these transitions. But doing that, he'll face challenges far different from the ones he started with 19 years ago.

"There are very few CEOs who were in place when John took over Cisco who are still in place today," Gartner analyst Joe Skorupa said. Under Chambers' leadership, Cisco has grown from a moderately sized networking specialist to a giant with more than US$40 billion in annual revenue.

The tech industry has also matured in that time, and growth is harder to come by for many established companies, Skorupa said. They need to compete with rivals from other market segments and with former or even current partners, he said.

"The market is far more challenging than it was 15 years ago," Skorupa said.

"They are the networking company. The question is, where does Cisco go from there?" Doyle said. "They're a long way from being a dominant IT company."

For shareholders, the key is finding growth, he said.

Whether that means a new CEO is another matter. Chambers has laid out vague timelines for retirement in the past, but last November he told CNBC that he didn't expect to make a move for another year or two as the company works through the current challenges. Even when he quits as CEO, he's expected to stay on as chairman.

Chambers has also shared lists of possible candidates to take his place. One of those, Rob Lloyd, president of development and sales, will give the keynote address on the company's "technology business vision" at next week's Cisco Live conference in San Francisco. Chambers will appear the afternoon before in a welcome address and "business vision" keynote. That prominent spot suggests Cisco is setting up Lloyd as a successor, but the picture could change again before Chambers makes a move.

It's not clear who at Cisco, including Lloyd, could fill Chambers' shoes, some analysts said. Chambers maintains a high profile in the industry, has advised the president of the U.S. and has access to world leaders, said Zeus Kerravala of ZK Research.

"You'd be hard-pressed to find another person inside or outside Cisco who can do that and run a tech company," Kerravala said. He doesn't think Chambers is under pressure within the company to step down.

Doyle thinks there are good reasons for a new leader to take the reins at Cisco, including the need to reinvent the company around software and services and focus on making its networks easier to use. But he doesn't expect Cisco or Chambers to take that step any time soon.

"I'll bet you that he's going to be CEO for quite a while, barring some unexpected huge drop in their stock or financial output," Doyle said.