HP also announces new Envy X360 and Pavilion X360 hybrids with screens that can rotate 360 degrees, much like Lenovo's Yoga 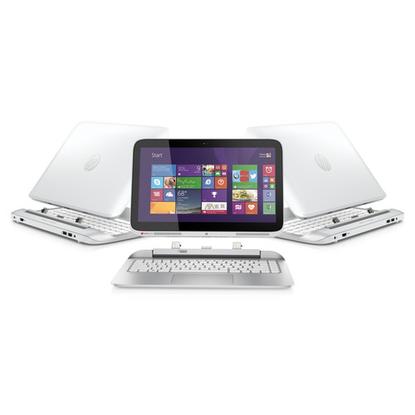 Tablets are mostly packed with flash storage, but Hewlett-Packard has made an exception and plugged a high-capacity hard drive into its latest Split X2 budget tablet.

The 13.3-inch Split X2 tablet has a 500GB hard drive, and will be sold with a keyboard dock for laptop functionality. The reason for using a hard drive is to give budget tablet users more storage capacity, said Mike Nash, vice president of product management at HP.

The Split X2 starts at US$599, and will be available in the U.S. starting in July. It uses Intel chips.

Hard drives are also slower and more power hungry than SSDs and NAND flash storage. But the Split X2 tablet offers 6.5 hours of battery life, and 3.5 hours more with the keyboard dock, which has a spare battery, Nash said.

The first Split X2 was announced a year ago but with a hard drive in the keyboard dock. Now there's no need to dock the tablet to the keyboard anymore, Nash said.

While it's a rare move, some other device makers have also put hard drives in tablets. Archos' aging 80 G9 Android tablet has a 250GB hard drive. Seagate is making thin hard drives for tablets, and anticipates demand for the class of products to increase with more users downloading high-definition multimedia.

HP on Sunday also announced two new hybrids -- the Pavilion X360 and Envy X360 -- that can be turned from laptop to tablet by rotating the screen 360 degrees. The hybrids are similar to Lenovo's Yoga, which pioneered the design.

The Pavilion X360 has a 13.3-inch screen, and is priced starting at $599.99 with an Advanced Micro Devices A8 processor, and $629.99 with an Intel Haswell processor. It is 22-millimeters thick, weighs 1.95 kilograms, and supports up to 1TB of storage and 8GB of memory. The hybrid will be available in the U.S. starting on June 20.

The Envy X360 has a 15.6-inch screen and runs on Intel's Core processor. It has an extra-wide trackpad with gesture zones for easy access to Windows 8 functions. That gesture-zone feature has been borrowed from the company's Spectre ultrabook. The Envy X360 is 23 millimeters thick, and weighs 2.6 kilograms. The hybrid will become available on June 11 starting at $679.99.

Worldwide shipment dates for the products were not immediately available. Some of them may be shown at Intel's booth during the Computex trade show in Taipei this week.

HP has also announced a cheaper version of its Chromebook 11, which will start at $249 instead of $279. It carries over many similar features from its predecessor like the 11.6-inch screen, webcam, 2GB of memory and 16GB of storage. A lot of Chromebook makers are moving over to Intel chips, but HP has stuck to Samsung's Exynos 5 chips for the laptop.