How to stream downloaded files from your smartphone to your Chromecast 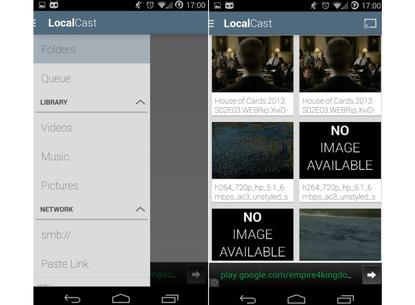 Use LocalCast to stream locally stored files to Chromecast.

The Chromecast has just hit Australia, and plenty of people are excited about it. But one question we keep getting asked is whether the Chromecast can be used to stream videos that have been downloaded from the Internet. The short answer is ‘yes’. The long answer is ‘you need an app to do it’.

The way Chromecast works, your smartphone, tablet, and laptop, all act as remote controls of sorts to get content flowing through the Chromecast, which is plugged in to an HDMI port on a TV. While the Chromecast is designed specifically to very easily stream YouTube and other Google content on a big screen, it can also be used to stream regular, downloaded movies and TV shows. However, in order to do so, you need to have a third-party app installed that can act as a media server, and which supports Chromecast, of course.

One of the best apps we’ve found for the job so far is LocalCast. It’s available on Google Play and it’s ad supported, so you get a few ads showing up on your phone screen now and then while a video is playing. What’s good about it is that it can stream files that are stored directly on your phone, or even ones that are stored and shared in network locations. All you have to do is browse the location that you’re interested in and fire up the files you want to watch.

If you store all your media on a NAS device at home, then LocalCast can be used to browse all that content and stream it to your Chromecast. You can use DLNA if your NAS supports it, or just SMB, which we prefer as it allows you to easily browse folders to find specific content. To add your NAS device, you have to know its IP address, and you have to supply your login credentials if you have your folders password protected.

In this scenario, your smartphone or tablet becomes the ‘remote control’, since you are using it as the interface to browse and play files from the NAS to the Chromecast -- you can still use your phone for other things while files play in the background. We found the performance of the streams to be a mixed bag, but overall think it’s a good solution. For example, standard definition files streamed perfectly across our network. Full HD files also streamed well enough, but there was some stuttering at the start and also during random intervals in the playback.

We should note that not all files can be streamed through the Chromecast using LocalCast. In fact, it will only support files that are encoded using the H.264 codec, and which have either an MP4 or MKV file type extension. You won’t be able to play back other files types, such as AVI, through LocalCast. For those types of files, another way to play them is to use a media server such as Plex on your laptop, and then run those files to the Chromecast through the Chrome Web browser.

If you use another app to stream files, leave a comment below to let us know.