A voice control system for mobile apps will be launched in Taiwan, Thailand and New Zealand 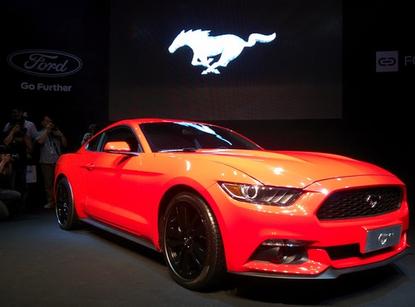 Ford's new Mustang on show at Computex in Taipei on June 2, 2014

Ford will begin offering its AppLink voice control system in additional Asian markets and bring its emergency assistance technology to Taiwan, the company said Monday at the Computex trade show in Taipei.

AppLink allows drivers to control mobile apps with voice commands and is being launched in three Asia Pacific markets this year: China, Australia and India. On Monday, Ford said it will begin offering AppLink in New Zealand, Taiwan and Thailand in 2015.

Its emergency assistance system, which automatically dials emergency services in the event of an accident, will also come to Taiwan. Already installed in 9 million vehicles, the system is triggered by an airbag deployment or emergency fuel cut off and gives drivers a 10-second window to cancel the call before it is automatically placed through a paired cell phone.

Ford will also demonstrate this week its vehicle to vehicle communications system that allows suitably equipped cars to pass information between each other over Wi-Fi. The data includes vehicle speed, location and predicted path and is being eyed as a potential way to reduce traffic collisions.

For example, if a vehicle makes a sudden lane change, that information is automatically passed to cars traveling behind allowing them to adjust their speed or course to avoid an accident. Or at least, that's the theory. Ford and other auto makers are researching such technology but it's yet to see a large-scale test.

The demonstration in Taipei will be the first time it's been shown in the Asia Pacific.