Skype app for iPhone due out from Microsoft today 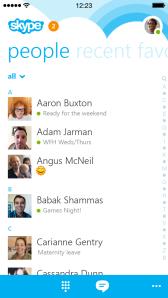 Microsoft is shipping an overhauled Skype app for the iPhone

Microsoft promises that a revamped Skype app for the iPhone will be significantly better than the current version, although it may be too late for users who have long since switched to other options.

Microsoft is hoping users will be lured back, saying that version 5.0 of the IM, audio/video communications and IP telephony app, due out Thursday, has been rebuilt from the ground up. The company pledges it is faster and more stable than the old version, and that its user interface has been redesigned to make it simpler and more fluid.

"We're excited for you to see how the new app has been redesigned to put your conversations first, providing you with a smoother, leaner and more integrated experience," wrote Microsoft official Gary Wong in a blog post.

Microsoft is also promising that Skype 5.0 for iPhone will stay synchronized with users' other instances of Skype on other platforms, so that, for example, read messages won't appear elsewhere as unread, a major complaint with the previous version of the app.

Last week, Microsoft gave a sneak peek at some of the app's major enhancements, including smoother scrolling among screens and the ability to send messages and photos to users who are offline.

Apparently, Microsoft plans to speed up the pace of improvements for the app going forward. "Skype 5.0 for iPhone is just the beginning of a new Skype experience on iPhone," Wong wrote, a statement that's in line with the company's strategic shift under new CEO Satya Nadella to make sure its software products work well on non-Windows platforms.

Skype 5.0 for iPhone requires iOS 7 or a later version. An iPad edition of the app is in the works.