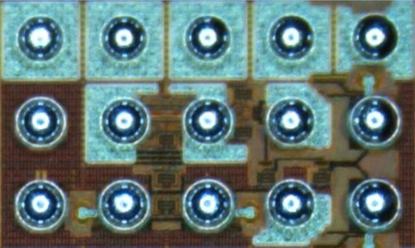 Fujitsu Laboratories has developed a receiver circuit, seen here, that can receive communications at 56 Gbps.

The receiver circuit can attain speeds of 56 Gbps, Fujitsu Laboratories said Friday, claiming the circuit was the fastest of its kind in the world.

The technology could greatly boost performance in servers, cloud computing and supercomputers, the company said. Research presented by Fujitsu Labs on Friday at the 2014 Symposia on VLSI Technology and Circuits in Hawaii detailed the innovation.

It uses decision feedback equalizer circuits to compensate for degradation in incoming data signals. By using an anticipatory "look ahead" architecture in the circuit to correct for degradation problems, Fujitsu Labs was able to increase the operating frequency of the circuit and double its speed.

The technology is different from other products already on the market operating at 56 Gbps, such as 4X FDR InfiniBand, Fujitsu Labs said, because it achieves 56 Gbps within a single receiver circuit, whereas 4X FDR InfiniBand uses four 14Gbps circuits operating in parallel.

The know-how could also boost speeds outside of server applications.

"It is possible to integrate this technology into consumer devices," Hisakatsu Yamaguchi, a research manager in the Server Technologies Lab at Fujitsu Laboratories, wrote in an email interview.

"Initially, it will be applied in high-end products, but if we look at past technology trends it is likely for it to be applied in consumer devices several years afterwards."

Fujitsu Labs said it will use the technology in the interfaces of CPUs and optical modules, and aims for implementation in the year to April 2017. It may also be applied to servers, supercomputers and other Fujitsu products.