China's "hyperscale" server segment is fast-growing, and adding to the demand, according to IDC 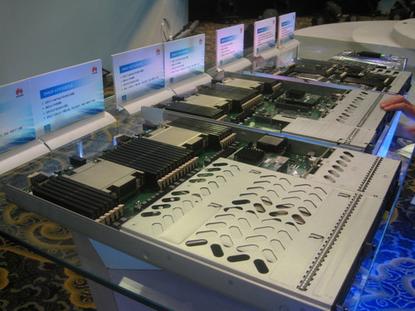 Chinese server vendors are making big gains in their home market, and putting pressure on U.S. rivals Hewlett-Packard and IBM in the "hyperscale" segment, according to research firm IDC. Dell, though, remains the country's number one server vendor.

In this year's first quarter, Huawei Technologies and Inspur saw their market shares reach 13.7 percent and 12.1 percent respectively. It's a big change from a year ago, when the two companies' market share was still in single digits, and they lagged behind HP and IBM.

As Huawei and Inspur rise, HP's and IBM's server shipments in China are declining. IBM was in a solid second place behind Dell a year ago, but its market share fell to 12.1 percent in this year's first quarter. As for HP, its share 2 percentage points over the year, to 12.8 percent.

Driving the Chinese vendors' business is growing demand for hyperscale servers from the country's Internet giants, including search company Baidu and e-commerce firm Alibaba Group. The hyperscale segment makes up a third of China's x86 server market, and is fast growing, said Eric Peng, an IDC analyst, on Friday.

"The Internet companies are buying so many servers, the hyperscale industry is shaping the market," he said. "The Chinese vendors are putting more focus on this segment."

Dell continues to lead China's x86 server market with a 20.2 percent share. But Chinese vendors are catching up, at a time when servers are also becoming more commoditized with the availability of Intel chips, Peng said.

"The differences in quality between server products is small," he added. "The profit margin is shrinking."

The market is also set to change with Lenovo's planned acquisition of IBM's x86 server business, announced back in January. In this year's first quarter, Lenovo had a 12.8 percent share of the country's market.

The Chinese server market itself grew 24.5 percent year over year, with server market revenue hitting US$1.7 billion. China's government departments, and state-owned telecommunication firms and banks, are also investing heavily in upgrading their IT systems, helping to drive server demand, according to IDC.

China has often favored buying from local tech suppliers over foreign vendors. But that trend could accelerate even more from fears of U.S. electronic spying creeping into the country. In May, the Chinese government said it would block companies from selling IT systems in the market if they failed to pass a new "cybersecurity vetting system."

What effect these security fears will have on the market is still difficult to gauge, Peng said. But even if U.S. vendors face some resistance, the China's server market is still a big pie, with demand growing fast in the commercial sector. "There will still be a lot of opportunities. Even with the local vendors competing, I think the market will be big enough for everyone," he added.