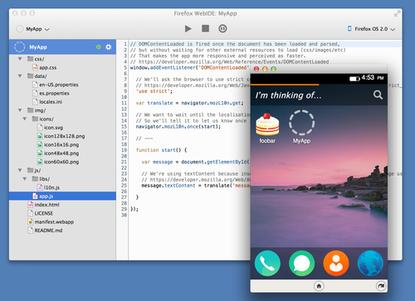 Programmers who may be curious about building mobile apps but aren't sure how to get started could get a hand from Mozilla, which is testing a new code editor, called WebIDE, which will be built into the Firefox browser.

"Developers tell us that they are not sure how to start app development on the Web, with so many different tools and templates that they need to download from a variety of different sources. We're solving that problem with WebIDE," wrote Dave Camp, Mozilla's director of development tools, in a blog post announcing the new IDE (integrated development environment).

A working version of WebIDE is now being included in the nightly builds of future versions of Firefox currently being developed. The nightly versions are posted only for testing purposes, allowing outside parties to view the new features the browser team is working on.

Using WebIDE, developers can start with a functioning blueprint of a Web app that can be run on either a desktop or a mobile phone browser. They then can fill in the JavaScript, CSS (Cascading Style Sheets) and HTML5 code using an editor within a browser window. They'll see their changes immediately in another window that runs the app in simulation mode. Though the tool can be used to develop desktop Web apps, it's intended primarily for mobile.

Mozilla has also set up a repository where developers can contribute additional templates.

Developers can also test an app on a device itself, by running it on the Firefox mobile browser and debugging it over USB by way of a remote debugging API (application programming interface).

Eventually, the software will be able to communicate with other browsers, such as Chrome for Android and Safari on iOS. Over time, the browser will also offer a way to test apps over Wi-Fi.

WebIDE is based on the open-source CodeMirror editor and uses the tern.js code analysis framework. It also uses a fairly large set of debugging and inspection tools already built into Firefox, called Firefox Developer Tools.

Mozilla did not offer an estimate of when WebIDE will be included in a full Firefox release. The next version of the browser, Firefox 31, is due the week of July 22.