The company is developing 3D-printed robots that mimic humans 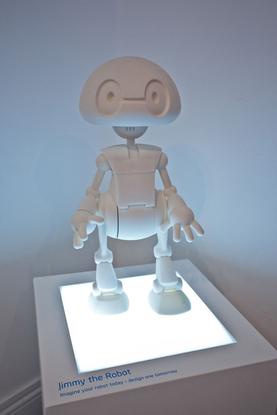 A family of robot kits for 3D printers is being developed by Intel, with the first, named Jimmy, due out in September.

The 45-centimeter-tall "social robot" will cost $US1500. The walking robot, developed in conjunction with Trossen Robotics, is a smaller version of a $US16,000 robot shown by Intel CEO Brian Krzanich during a keynote at the Re/code conference in May.

The two-legged Jimmy will be one in a line of robots that Intel hopes do-it-yourself enthusiasts will embrace, developing more functionality for the robots, which will be able to handle tasks such as turning on lights, picking up newspapers and even having conversations, researchers said at the Intel Future Showcase 2014 in New York City. Intel and its robotics partners will sell kits with servo motors, batteries, boards, a frame and other internal parts. Using 3D printers, users can create robot designs and place them on the exoskeleton.

Jimmy uses two cameras to capture and analyze pictures, which can help identify objects. But it doesn't have a functional hand, so it can't pick up items or hand them to a human, which remains the biggest robotics challenge to resolve in developing Jimmy further, researchers said.

The chipmaker is equipping robots with its SD card-sized Edison board, which has a low-power Quark chip. The inexpensive Edison board is why Jimmy can be sold at $US1500, said Joe Zawadsky, program manager for the 21st Century Robot initiative at Intel.

Jimmy is a lot less expensive than its $US16,000 cousin, which has an Intel Core i5 processor based on the Haswell microarchitecture.

Intel's Jimmy robot will be further developed to include 3D depth-sensing cameras, allowing the robot to map out and analyze the distance between multiple objects. The technology is being derived from Intel's RealSense 3D camera technology, which can identify facial features and analyze the mood of a person. The first RealSense 3D cameras will be in laptops by the end of this year.

The chip maker is also developing "hexapod" robots with multiple legs and mobile robots with roller balls, researchers said. The robots will have sensors and cameras to analyze distance and movement, and wireless connectivity for communication.

Intel is also providing programming tools for mobile devices to control the movement and actions of robots. The Intel XDK software development kit will allow programs to be written in HTML5, so phones, tablets and PCs can control robots.

Giving hands, legs and communication abilities to robots will change the way humans interact with them, said Brian David Johnson, who is a "futurist" at Intel.

For Intel, the first challenge in building a functional robot was adding a bipedal leg and adding more hardware components for multifaceted robots, Johnson said.

But as prices come down, more people will be able to afford task-oriented robots for their homes, said Johnson, who has penned multiple books on robotics.

"Robots will be as common as the Internet," Johnson said.