How Samsung's Gear Live shrinks Android for the wrist

We also share photos of Google's new smartwatch, plus the LG G and Motorola 360 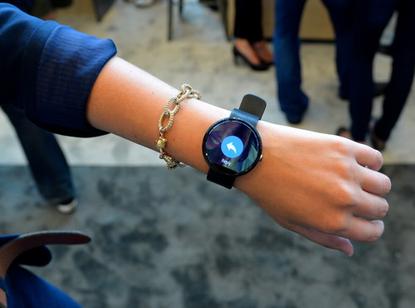 Google has unveiled the first three smartwatches that will run Android Wear, a cut-down version of Android for wearable devices, and we got our hands on one of them: the Samsung Gear Live.

The watch, which is available now in Google's Play Store, retails for US$199 and will compete with the LG G and Motorola 360.

While the watch runs Android Wear, it wasn't shown at I/O paired with a phone. Instead, Samsung demonstrated it with preloaded cards that don't offer the same level of interactivity but do illustrate how Google has shrunk Android for watches.

The system provides reworked versions of familiar Google services and other apps made for a smaller screen. Instead of the usual grid layout of apps, apps running on Android Wear are a lighter affair, focused around voice commands and simple taps and swipes.

For people who can't be bothered to use their smartphones, the Gear Live has the Google Now personal mobile assistant, Google Maps, Gmail, Hangouts and other apps, with more sure to come.

You can reply to messages on the watch, but since there's no keyboard, you're limited to pre-programmed responses, which may be set on the paired Android device.

But it also supports voice commands, so you can say "OK Google," and ask it for sports scores or the time of a flight departure, or send a text.

Physically it's a little larger than the average digital watch, and that might feel awkward for some.

The device is designed to be paired with any Android device running version 4.3 or higher.

The unit has a 1.2GHz processor, a 1.63-inch high-resolution display, 512MB of RAM and 4GB of internal memory. The battery on the unit should last about a day between charges, Samsung said. The unit also has a built-in heart rate monitor designed to work with other fitness-tracking apps.

The Gear Live has some similar specs compared to LG's G, though that watch retails for $229.

The Motorola 360, however, has generated interest at the show for its more classic look and circular watch face. Google, however, isn't releasing specs yet on that watch, which goes on sale later this summer.