Thousands have been infected by malware masquerading as a legitimate banking application, Cheetah Mobile said 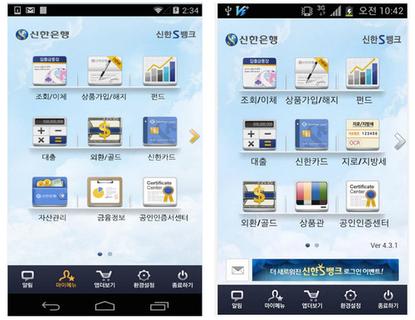 Thousands of Android users in South Korea have been infected by online banking malware that looks very similar to the legitimate banking application, according to Cheetah Mobile, a Chinese mobile security company.

Malicious software that swaps itself for legitimate online banking applications is striking users in South Korea, with thousands of devices infected in the last week, according to a Chinese mobile security company.

Google checks Android applications in its Play store for malicious behavior, but third-party marketplaces are often rife with malicious applications. Security experts advise caution when using such sources for applications.

If the malicious application is installed, it scans for the official applications of South Korean banks including Nong Hyup, Shinhan, Kookmin, Woori, Hana, Busan and the Korean Federation of Community Credit Cooperatives, Cheetah Mobile wrote.

The malware then displays an alert that states that the online banking application needs to be updated. If the update is approved by a user, the malware deletes the legitimate application and replaces it with a similar looking but malicious copy. More than 2,000 variations of the malware have been detected by Cheetah.

It then asks for the password for the user's security certificate, which is required by the South Korean government in order to access many online services in the country. It also requests a bank account number, passwords and another security number issued to users when they opened an account, Cheetah Mobile wrote.

The malware then falsely alleges there isn't a data connection. When that message is closed by a user, the malware deletes itself from the devices having already stolen all of the information it needs, Cheetah Mobile wrote. The attackers use the information to apply for a new security certificate in order to access the victim's account.

Cheetah Mobile, which makes several security software programs and utilities for Android devices, said it detected between 3,000 to 6,000 infections per day between June 17 and Tuesday.

"This virus is very stubborn and can be hard to remove," it said.