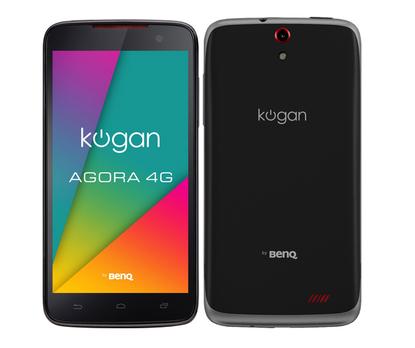 Adorning the Agora 4G is a BenQ badge as the electronics maker looks to establish a presence in the Australian smartphone market. The aggressive price point, coupled with the Kogan’s brand recognition, should see many customers calling this BenQ smartphone their own.

The 4.4 KitKat Agora 4G has a decent specification repertoire. Its 5in LCD IPS display has a 1280x720 resolution for a reputable 294 pixels-per-inch (ppi). This marginally follows the retina 326ppi standard popularised by Apple.

Inside is an 1.2GHz quad-core CPU, an Adreno 305 GPU, 1GB of RAM and 8GB of internal storage. A microSD slot makes it possible to expand storage further with a 64GB memory card.

Photos can be snapped with the rear 8 megapixel camera or with the front-facing 1.3 megapixel cam. Neither Kogan nor BenQ have shared the smartphone’s video-recording specs.

Kogan claims the 2500 milliamp-hour battery will keep the smartphone powered for a whole day.

The Agora 4G is being sold exclusively by Kogan for $229. Good Gear Guide will publish a review of the Agora 4G as soon as possible.