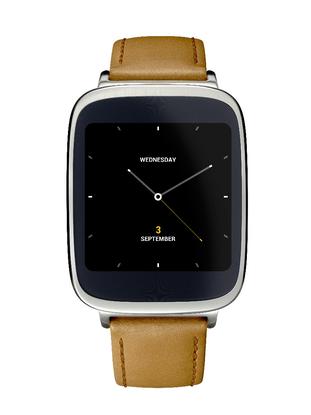 Asus has unveiled its ZenWatch, a smartwatch that will go head-to-head with LG’s G Watch R and Motorola’s Moto 360, at the IFA tradeshow in Berlin.

Update, 11:48am: Asus Australia has confirmed in a statement to GGG the ZenWatch is coming to Australia.

“ASUS intends to bring the ZenWatch Australia – however, there is no timeline confirmed for launch.”

The ZenWatch is as a companion to smartphones running Android 4.3 and later. Double tapping its screen will trigger a smartphone to ring so that it may be located; covering the screen mutes incoming calls; and, although the ZenWatch doesn’t come equipped with a camera, its screen can be used as a remote viewfinder to frame photos.

Asus will use the ZenWatch to enter the health market. It comes equipped with a heart monitor, a wellness app and a 9-axis sensor, which will record steps taken, calories burned and exercise activity.

The smartwatch has a 1.63in AMOLED screen with a 320x320-pixel resolution, is powered by a 1.2GHz Qualcomm Snapdragon 400 CPU, has 512MB of RAM, 4GB of internal storage and a 1.4 Watt-hour battery. Bluetooth 4.0 is used to pair the ZenWatch with compatible smartphones.

The full specs of the ZenWatch can be viewed at the device's overview page but the company didn't reveal when it will be released.

Yang used the opportunity to highlight the benefits of pairing the ZenWatch with the company's recently launched ZenFone. Asus claims to have shipped one million ZenFones each month since launch.

Asus has priced the ZenWatch at 199 euros. Good Gear Guide will update this article with news from Asus Australia.