Just five gangs in Nigeria are behind most Craigslist buyer scams 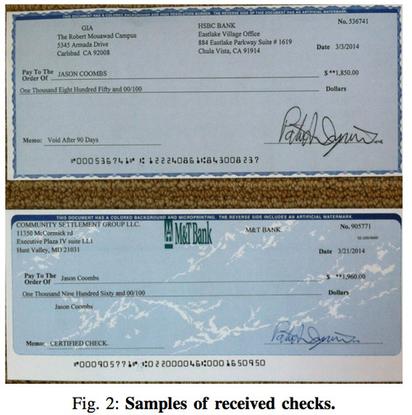 Nigerian gangs are using professional check-writing software to dupe sellers on Craigslist, sending those checks from U.S. addresses to not raise suspicion.

Five Nigerian criminal gangs are behind most scams targeting sellers on Craigslist, and they've taken new measures to make their swindles appear legitimate, according to a new study.

In a new innovation, they're using professional check-writing equipment plus U.S.-based accomplices to not raise suspicions among their victims.

"I think the most surprising thing was the number of people in the U.S. participating in this scam," said Damon McCoy, an assistant professor in the computer science department at George Mason University, in a phone interview.

McCoy and colleague Jackie Jones, of George Mason's information technology department, seeded Craigslist with advertisements for laptops to see if they could attract scammers who target sellers.

Craigslist has many protections to weed out fraudulent product listings, "but little effort has been made to protect legitimate users receiving responses from fraudulent buyers," according to their paper, due to be presented on Sept. 24 at the IEEE eCrime Research Summit in Birmingham, Alabama.

They priced the laptops at a 10 percent premium over similar goods listed on Amazon, which deterred all but one legitimate buyer.

The bogus buyers got in touch over email. To track where the scammers were based, Jones and McCoy responded with emails containing images of the products offered for sale. When the link was clicked on, the scammers real IP address was revealed.

Invariably, the senders were based in Nigeria. More than half of bogus payments received were linked to just five Nigeria-based groups, showing how buyer scams originate from a fairly small circle.

It works like this: The buyer tells the seller they can pay for an item with a certified check. The buyer says, however, that he can't pick up the item and needs to user a "mover" agent.

The seller is quickly sent a check by FedEx or UPS from a U.S. address that is printed with professional check-writing equipment for well over the amount of the laptop, averaging about $1,500.

The seller is supposed to cash the check, keep the amount for the laptop and send the rest by Western Union to a mover agent, who is based in the U.S. The victims are also asked to ship the item.

Some U.S. banks will still "float" funds from a check before it has cleared, McCoy said. But the fake check will be discovered eventually, and the bank will try to recover the funds.

What was particularly interesting about this scam is that the checks were all sent from within the U.S., indicating that the groups in Nigeria recruited local help. That is a potential choke point for law enforcement trying to deal with the problem, the researchers wrote.

The checks were good enough to fool banks, which would begin processing them. McCoy said several banks thought the checks looked fine at first sight, with the correct routing numbers for the banks. Some of the phony checks were generated using VersaCheck software on legitimate check paper, with watermarks and other security features.

Most of the checks listed real businesses that were geographically close to the bank listed on the check.

The strong U.S. hook makes it unlikely that a victim would ever even know they were dealing with someone in Nigeria, McCoy said.

The fake check scam is much more profitable than PayPal scams that try to dupe the person into thinking they will be paid from an escrow account when an item is shipped.

In those cases, the scammer only gets an item, while in the check fraud, they will get cash and possibly an item as well.