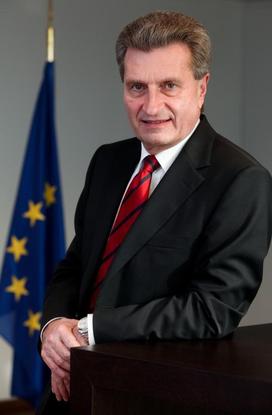 EU Commission President-elect Jean-Claude Juncker on Wednesday revealed his nominees for the 27 new commissioners due to take office on Nov. 1, including some controversial choices for officials responsible for technology and competition policy.

Echoing criticism by other politicians, Jan Philipp Albrecht, a German member of the European Parliament representing the Green and Liberal Alliance, called Günther Oettinger, designated to be the commissioner for Digital Economy and Society, the "biggest miscast" of the nominees, mainly due to his perceived inexperience in technology policy.

One of the biggest challenges facing the new Commission is the creation of a so-called "digital single market," harmonizing tech-related policy and laws across the EU, Juncker said.

"By creating a connected digital single market, we can generate up to €250 billion of additional growth in Europe in the course of the mandate of the next Commission, thereby creating hundreds of thousands of new jobs, notably for younger job-seekers, and a vibrant knowledge-based society," Juncker said in a statement.

Andrus Ansip, who was the Estonian prime minister until he resigned in March, is designated to become Commission vice president responsible for the digital single market. He will lead a project team that aims to make better use of the opportunities offered by digital technologies, according to the Commission statement. His team will also focus on telecom regulation, copyright and data protection legislation, management of radio waves and the application of competition law, it added.

Ansip's main task will be "presenting ambitious legislative steps towards a connected digital single market," the Commission said. To achieve that, he will work closely with Oettinger, a German who is currently the EU's Commissioner for Energy. Oettinger will be responsible for modernizing copyright rules, the Commission said.

The importance of the challenges facing the new Commission were highlighted by James Waterworth, vice president of the Computer & Communications Industry Association, in an emailed statement. "Mr Ansip and Mr Oettinger, and the rest of the college of Commissioners, need to ensure Europe's innovators and citizens get full benefit from the open, global Internet. This means putting in place the right conditions for startup companies and ensuring citizens continue to enjoy the widest access to information, products and services," he said.

However, not everyone was pleased with the proposed candidates. Julia Reda, member of European Parliament for the European Pirate Party said on her website that, though she was pleased that digital themes take a prominent spot in the new Commission's plans, "I cannot expect much from Commissioners Oettinger and Ansip, who will be in charge of internet policy."

Oettinger has no experience in the area he has been nominated for, Reda said. And by appointing Ansip, the Commission is getting a vice president who has been an advocate for the Anti-Counterfeiting Trade Agreement, which threatened digital rights of European citizens, she added. The Commission gave up its fight on behalf of the controversial antipiracy trade pact in 2012.

Juncker also presented some other names that are going to be important for the IT industry. Danish politician Margrethe Vestager is designated to become competition commissioner. In that role she could be dealing with several antitrust issues involving Google and other tech companies, including the antitrust case over Google search that has been ongoing on since 2010. She could be dealing with that case if it isn't closed by October, which is possible since the current Commission vice president, Joaquín Almunia, said this weekend that he is seeking more concessions from Google in that case.

The Czech politician Vra Jourová is designated to become commissioner responsible for justice, consumers and gender equality. That role could include reforming Europe's data protection laws.

Loek is Amsterdam Correspondent and covers online privacy, intellectual property, open-source and online payment issues for the IDG News Service. Follow him on Twitter at @loekessers or email tips and comments to loek_essers@idg.com