The device, which could cost pennies to make, is expected to help enable the Internet of things 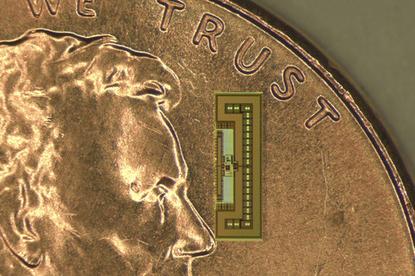 The tiny radio-on-a-chip gathers all the power it needs from the same electromagnetic waves that carry signals to its receiving antenna.

Engineers at Stanford University have developed a tiny radio that's about as big as an ant and that's cheap and small enough that it could help realize the "Internet of things" -- the world of everyday objects that send and receive data via the Internet.

The radio is built on a piece of silicon that measures just a few millimeters on each side. Several tens of them can fit on the top of a U.S. penny and the radio itself is expected to cost only a few pennies to manufacture in mass quantities.

Part of the secret to the radio's size is its lack of a battery. Its power requirements are sufficiently frugal that it can harvest the energy it needs from nearby radio fields, such as those from a reader device when it's brought nearby.

RFID tags and contactless smartcards can get their power the same way, drawing energy from a radio source, but Stanford's radio has more processing power than those simpler devices, a university representative said. That means it could query a sensor for its data, for instance, and transmit it when required.

The device operates in the 24GHz and 60GHz bands, suitable for communications over a few tens of centimeters.

Engineers envisage a day when trillions of objects are connected via tiny radios to the Internet. Data from the devices is expected to help realize smarter and more energy-efficient homes, although quite how it will all work is yet to be figured out. Radios like the one from Stanford should help greatly expand the number of devices that can collect and share data.

The radio was demonstrated by Amin Arbabian, an assistant professor of electrical engineering at Stanford and one of the developers of the device, at the recent VLSI Technology and Circuits Symposium in Hawaii.