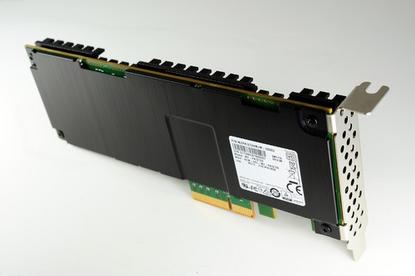 Samsung keeps raising the bar on storage capacity in its solid-state drives with a 3.2TB SSD, which is now in production.

The SM1715 drive is Samsung's highest-capacity SSD to date, and is built for reliability and durability, Samsung said in a statement. Samsung didn't provide either a price or shipment date for the 3.2TB drive, but the company usually ships SSDs months after they go into production.

Samsung's previous highest-capacity SSD could store 1.6TB, but the SM1715, which is targeted at enterprise customers, will provide a speedier, power efficient and more reliable alternative.

SSDs are used by enterprises in storage arrays or as cache in servers where data is temporarily stored when being processed. The SM1715 drive will plug into the PCI-Express 3.0 slot, as opposed to the SATA interface for hard drives and older SSDs.

Samsung is leaning to transition over to the PCI-Express 3.0 for drives with capacity of more than 3TB. The PCI-Express drives are based on the NVMe (NVM Express) protocol, which is for high-speed SSDs.

The SM1715 will also come with 1.6TB in storage capacity, Samsung said.