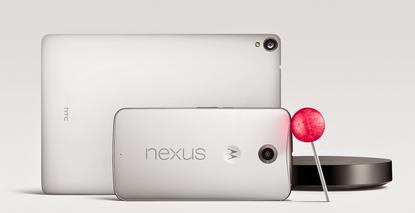 Google has strategically launched its new range of Nexus devices 24 hours ahead of an Apple event reportedly dedicated to the next generation iPad Air.

The new devices include the Nexus 6 smartphone and the Nexus 9 tablet, both of which will be the first devices to run the upcoming Lollipop version of Android.

Google commissioned HTC to manufacture the Nexus 9 tablet. The 8.9in tablet is the first device from Google to have a 64-bit processor — similar to that of Apple’s current iPad Air.

Unveiling the tablet 24 hours ahead of Apple’s event is a strategic move by Google. Chiming on Apple’s launch day will force comparisons to be drawn between a new iPad and Google’s Nexus 9.

Google subsidiary Motorola manufactures the Nexus 6. The 6in smartphone is the first ‘phablet’ to carry the Nexus branding. The smartphone will compete against Apple’s first phablet, the iPhone 6 Plus, along with Samsung’s upcoming range of Galaxy Note devices.

The Nexus 6 has a 6in, 2560x1440 resolution screen, a next-gen 2.7GHz quad-core CPU, a 13 megapixel rear camera capable of UHD recording, a fast charge battery and a ring flash.

Pre-orders for the Nexus 9 will open first on 17 October, with the tablet available on Google Play on 3 November. The Nexus 6 will follow with pre-orders opening in “late October” and sales commencing in November.

Existing Nexus devices, including the Nexus 4, 5, 7 and 10 are scheduled to receive the update to Android Lollipop ‘in the coming weeks’.