Macro attacks fell out of favor years ago but are coming back, Trend Micro said 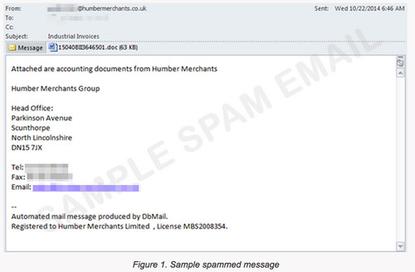 Trend Micro said it has seen a banking trojan, Dridex, use malicious macros inside Microsoft Word documents to try to install itself on computers.

A recent piece of malware that aims to steal your online banking credentials revives a decade-old technique to install itself on your PC.

Called Dridex, the malware tries to steal your data when you log into an online bank account by creating HTML fields that ask you to enter additional information like your social security number. Thats not unusual in itself: Dridex is the successor to a similar piece of malware called Cridex which also targets your bank account.

Whats different is how Dridex tries to infect your computer in the first place. It's delivered in the form of a macro, buried in a Microsoft Word document in a spam email message.

Cybercriminals started using macros more than a decade ago but they fell out of favor after Microsoft strengthened its security defenses against them. But some hackers are apparently trying them again.

Most PCs disable macros from running by default. But if the malicious Word file is opened, it advises users to enable macros, and if they do, Dridex starts downloading to the PC, wrote Rhena Inocencio, a threat response engineer, on Trend's blog on Wednesday.

"The move to macros could be seen as one way of ensuring a higher chance of successful attacks," she wrote. "If the macro feature was already enabled prior to the attack, the attack commences without any additional requirements. Otherwise, the attack must use a strong social engineering lure in order to convince the user to enable the feature."

Once installed on a computer, the malware is programmed to jump into action when it sees a person visits one of a long list of banks, including Bank of Scotland, Lloyd's Bank, Danske Bank, Barclays, Kasikorn Bank, Santander and Triodos, she wrote.

The spam messages for Dridex came mostly from Vietnam, India, Taiwan, South Korea and China, while the top three countries infected with it are Australia, the U.K. and the U.S.