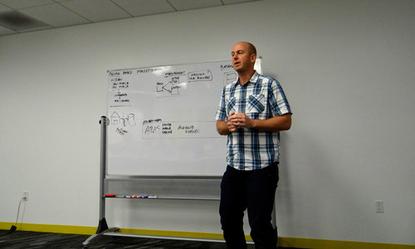 Brian Boland, VP of advertising tech at Facebook, outlining the company's various ad products during a talk on Dec. 10, 2014.

While many activities have migrated online, Facebook is still eager to know how its users shop in physical stores.

That information helps companies figure out if their ads are effective, and whether to follow up with other ads. Did you buy a bike in that shop but no helmet? Maybe next day in your News Feed you'll see an ad for one.

With more than 1.3 billion users, it's no surprise many businesses feel they have no choice but to advertise on Facebook. But companies want to know their ads work, and most purchases still happen in physical stores, not online.

Facebook sees an opportunity there. Connecting the dots between the ads users see and the purchases they make in stores is a key goal of its advertising efforts, and its working hard to improve the connections, executives said Wednesday at the company's headquarters in Menlo Park, California.

Brian Boland, Facebook's VP of advertising technology, described how Facebook's seemingly disparate advertising products fit together. "This will help you understand everything we do for the next couple of years," he said.

The company has made several acquisitions over the years to help advertisers target their ads and extend their reach. There's a lot of moving parts, but a good chunk of the machinery aims to show advertisers their money goes farther with Facebook than with traditional media like TV and print -- or even with rivals like Google.

Custom Audiences is one such targeting tool, allowing retailers to match shoppers in their stores with their accounts on Facebook. It's often done through an email address, phone number or name. Facebook uses a process it calls "hashing" to scramble the data, which means users' identities are not revealed in the process, Facebook says. But the matches let retailers gauge the effectiveness of their ads and follow up with more ads after the sale.

Facebook won't give hard numbers, but there seems to be a lot of matching going on. For decades, marketers have been trying to understand more about what's happening at the point of sale, "so their systems are really robust at capturing a strikingly large amount of transactions," Boland said.

"Our match coverage is very, very high," he said. "We can see quite a bit of the purchase history."

But Facebook wanted to take its tracking capabilities to the wider Web, so last year it acquired Atlas from Microsoft, an ad server that lets partnered advertisers track the effectiveness of ads beyond the borders of Facebook.

It rolled out a rebuilt version of Atlas in the fall, with an emphasis on tracking ads placed across mobile and desktop.

Facebook's Audience Network, meanwhile, lets companies get their ads placed in other publishers' mobile apps. That system was announced earlier this year at the F8 conference, with support for both iOS and Android apps.

For video, Facebook acquired LiveRail. Its technology lets publishers target video ads to specific segments of the population by age, gender and other traits. It's an important technology for Facebook, which has scaled out its video ads over the past year.

Its targeting and measuring capabilities are powerful, but they can't always work. A store needs to have some identifying piece of information about a customer, such as an email address, and sometimes the customer will provide a different email address than the one they use on Facebook.

The technology also doesn't work in large swathes of the developing world, where cash is used more widely than credit cards.

So where does privacy fit in? Facebook provides controls that it says provide users with information about how their data is used for advertising, though those controls are not always easy to understand. This year it rolled out a "privacy checkup" to remind users who can see their posts and other data they share.

"We want to make sure targeting is valuable and not creepy," Boland said.

And yet opting out of tracking for any website is very tricky, and especially those that rely on advertising for their business.