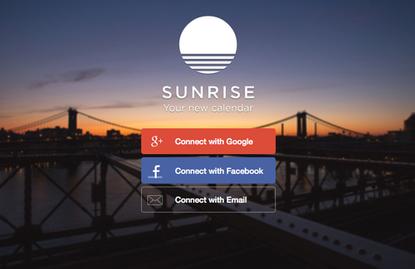 Microsoft is said to be acquiring Sunrise Atelier, maker of a hip calendar application that could aid in jazzing up Microsoft's own software.

Microsoft is acquiring the company for at least $100 million, TechCrunch reported Wednesday. A Microsoft spokeswoman declined to comment. Sunrise did not immediately respond to a request for comment.

Sunrise's calendar app runs on desktop browsers, iPhones, iPads and Android devices. It pulls information from people's local calendar apps as well as from third party services like Google Calendar, Apple's iCloud and Microsoft's Exchange. The app has been praised for its clean design and ability to organize scheduling information from multiple sources. It also serves as a personal digital assistant, by providing relevant information based on users' location.

Some other new apps providing "smart" calendar services include Tempo AI and Fantastical.

It's unclear whether Sunrise will remain available to download, although TechCrunch reported that Microsoft will keep the app alive while using some of the startup's technology for its own future products.

The acquisition could help Microsoft as it seeks to reinvent itself toward becoming a "productivity" company. Adding new functionalities to the existing calendar software in Microsoft Outlook seems likely. Microsoft did something similar when it acquired email organization software maker Acompli last year, incorporating its tech into the recently launched new versions of Outlook on mobile devices.