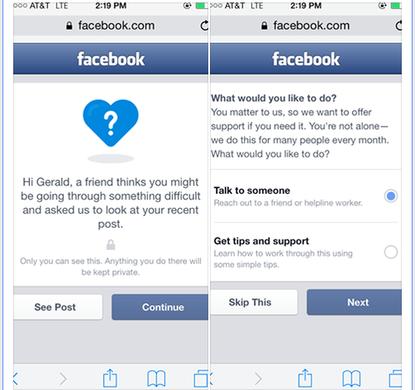 Facebook users whose posts have been reported by others will see this dialogue box upon logging in.

Facebook is adding new features to its site to provide better information and support to people at risk of suicide.

Facebook, the world's largest social network, has become a place for many of its 1.3 billion active users to share deeply personal thoughts. When users see posts from people who are directly threatening suicide, they should contact local emergency services immediately, Facebook says. Still, the company wants to improve how it responds to reports of suicide threats. It wants to provide better information to people in need and also to users who submit reports after seeing troubling posts.

Facebook users were already able to report what they considered to be content indicating suicidal thoughts, either from the top-right dropdown menu of posts, or by filling out this form. Facebook would then reach out to the person reported. Now, it's incorporating more information and communication tools into the process, and offering to connect the person who made the report with health professionals.

If a person is reported as being at risk of suicide, the next time they log in to Facebook, a new message box will appear, perhaps saying, "Hi Gerald, a friend thinks you might be going through something difficult and asked us to look at your recent post." From there, Facebook will provide a way to connect the person with a friend, or a mental health expert at the National Suicide Prevention Lifeline. (The direct number there is 1-800-273-8255.) The dialogue box will also provide a link to tips and advice in text and digital video form.

The resources were created in conjunction with clinical and academic partners, Facebook says. In supplying them, the company worked with mental health organizations like Forefront, Now Matters Now and the National Suicide Prevention Lifeline, and consulted with people who have intentionally hurt themselves.

Meanwhile, Facebook is now providing more resources to people who flag such posts. While previously the site may have only sent a thank you, now Facebook will offer to connect them with their friend as well as a worker at a suicide hotline, for support.

Facebook has a team of hundreds trained by mental health professionals who work around the world, 24/7, reviewing reports of troubling posts. The most serious reports, like those related to self-injury, are prioritized, Facebook says.

The updates will roll out to all Facebook users in the U.S. over the next couple months, on both the desktop and mobile. Improvements are in the works for people outside the U.S.

Facebook has added more tools around public health and safety issues as its user base has grown. Last month the company added Amber Alerts to its site and mobile app; last year it released a tool to let users tell their friends they're O.K. after an emergency.