YO! This messaging app has a lot more to say for itself, even offline

The app lets users message and share files via Wi-Fi, even without an Internet connection 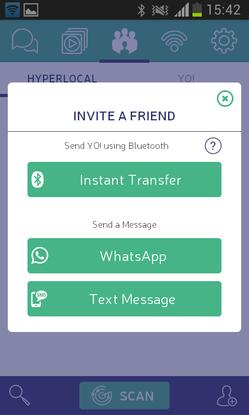 Need to communicate offline with a friend, but only one of you has YO! installed? Don't worry, you can share it over Bluetooth, no to download it from the Play Store.

Mobile World Congress is not the best place to launch a new messaging app: With thousands of tech-savvy visitors in Barcelona, many of them toting multiple connected devices, public wireless and Wi-Fi networks quickly become so saturated that it's difficult to send a message via Internet, even a brief "Yo," to a nearby colleague.

But that Yo is so last year. The app that could only send one word still sent every message to a central server before bouncing it over to its destination.

This year showgoers will be able to try out a new Android app, called YO!, that can send text messages, photos and videos over Wi-Fi to other users nearby without any Internet connection whatsoever, making it a true peer-to-peer messaging app. And as long as they're prepared to disable certain security settings on their phone, they won't even need to log on to the Play store to get it: Anyone with YO! installed on their phone can share it with other would-be users over Bluetooth.

With the app installed, users connected to the same Wi-Fi hotspot can chat freely with one another -- and if there's no hotspot nearby, one of the phones can be turned into a personal Wi-Fi hotspot and invite other app users within range to log on.

While messaging apps such as FireChat can already operate in a local, Wi-Fi only mode, they still require a working Internet connection for the initial download and activation. YO! will install, set up and run just fine without an Internet connection -- although if there is one, it can use it to communicate with other YO! users around the world.

YO! began life as a skunk-works project at the Bangladeshi development hub of Left of the Dot Media, a Canadian company that invests in interesting domain names and then tries to build a saleable business around them. To free up enough bandwidth for the lead developer's regular video conferences with management back in British Columbia, his colleagues in the Khulna office would have to log off the various Internet messaging services they used to discuss their work. Frustrated that they couldn't chat among themselves while he was talking, the programmers started building an instant messaging and file sharing application that would work offline, using only local Wi-Fi networks.

CEO Chris Jensen and his cofounder John Lyotier were so impressed when they saw it that they decided to turn it into a service for anyone to use -- and since they already knew the owner of the yo.com domain, they decided that would be a good name for it.

YO! dropped into the Play store on Saturday night (and an iOS version is on the way, according to Jensen), but it was first distributed in a closed beta test at the Digital World 2015 show in Dhaka, Bangladesh, last month. As the initial 500 beta testers have allowed others to side-load the app using the Bluetooth sharing function, the number of users has doubled, Jensen estimated, based on the limited usage statistics that the app sends back to base when it has a working Internet connection. He expects that number to mushroom, though, as 87,000 people had already signed up at yo.com to be informed of the app's launch.

While Westerners might think nothing of uploading hundreds of megabytes of photos and videos to Flickr or Facebook to share them with someone in the same room, that's not going to happen in places like Bangladesh. There, unlimited data plans and fast Internet connections are rare, and the dominant mode of sharing is to show someone your phone. YO! will make it easier and more economical for friends and family to share photos and videos.

YO! can transmit any media file Android considers shareable, including photos and videos taken with the phone, and even free apps downloaded from an online store, Jensen said, but it can't yet share paid apps or music files downloaded from services such as Napster or Spotify, which are kept in hidden directories or locked to a particular user account using DRM.

However, Jensen sees such uses as a money-making opportunity for the app -- and a way to reassure network operators that YO! is not trying to make their networks redundant. A future version of YO! should make it possible to share such DRM-protected songs, films and apps offline, using the cellular network only to download and pay for the DRM key needed to read the files, he said. That, he suggested, is something operators could build into their existing online stores or deliver over SMS, generating revenue without additional network traffic.