Google has also added more horsepower to the Chromebook Pixel, which received its first upgrade in two years 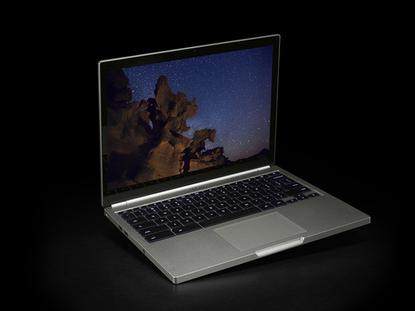 Starting with the new Chromebook Pixel, Google is paving the way to a future in which Chrome OS and Android devices will charge faster and have fewer ports.

The new Chromebook Pixel, announced on Wednesday, will have the multifaceted USB Type C port, which could save users from carrying a gaggle of wires. Beyond powering up Pixel, the port will link the laptop to monitors, cameras, printers and external storage devices.

Google was just a few days short of being the first to introduce a laptop with a USB Type-C port. Apple added one USB Type C port to its new 12-inch MacBook just a few days ago, but the Chromebook Pixel has two such ports.

The Chromebook Pixel was first introduced two years ago with a 12.85-inch screen. A US$999 base model of the latest Pixel has an Intel Core i5 processor based on the Broadwell microarchitecture, 8GB RAM and 32GB of solid-state drive storage.

A $1,299 Pixel model has a Core i7 processor and 64GB of storage. The screen resolution of 2560 x 1700 pixels hasn't changed from its predecessor. Both models are 15.4 millimeters thick and weigh 1.5 kilograms.

But with such high prices, the Pixel isn't for everyone, especially with low-cost Chromebooks from other PC makers already available. But Google's goal with Pixel is to showcase the latest Chromebook features, and the company hopes PC and mobile device makers will grab some features such as the USB Type-C port.

"The Pixel is one of the first products to launch with this new standard, with more Chromebooks and Android devices following suit soon," said Andrew Bowers, Google's director of consumer hardware, in a blog entry.

Google in the past worked with Hewlett-Packard to bring micro-USB 2.0 charging to Chromebooks. But the experiment failed, and the companies had to recall the chargers. The new USB Type C port -- which is based on the USB 3.1 specification -- is more feasible for charging as it can carry enough power to run even TVs and home appliances.

Some USB Type-C storage devices are now trickling into the market. SanDisk announced a SanDisk Dual USB Drive Type C with 32GB of capacity. LaCie announced the Porsche Design Mobile Drive line of external storage drives with up to 2TB of capacity.

The new Pixel will fully charge in just two hours and 15 minutes through USB Type C, Google said. The laptop will provide 12 hours of battery life.

The Chromebook Pixel will also move data faster between the laptop and peripherals. The USB 3.1 port can shuffle data at up to 10Gbps (bits per second), which is two times faster than the current USB 3.0. The USB 3.1 technology has also received publicity for the USB Type-C cable, which is the same on both ends so users can flip cables and not worry about plug orientation.

Google has also launched a new Google Store from where the Pixel made by Google and others can be purchased.