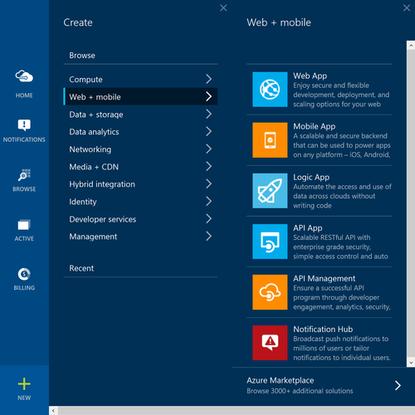 With a new integrated set of Azure-based services, Microsoft wants to help ease the process of developing applications that run in the cloud.

"We're hearing that developers want more simplicity. They're challenged with having to build apps that target a variety of platforms and devices," said Omar Khan, Microsoft partner director of program management. The new offering "brings together several services into a single experience."

The new Azure App Service could help organizations build Web applications or mobile applications that connect to a variety of data sources that reside in the cloud or in internal IT systems. The service features four different components that can be used by themselves or in tandem: Web Apps, Mobile Apps, Logic Apps and API Apps.

"All in all this is a strong step forward for Azure in terms of supporting developers," Al Hilwa, an IDC software development analyst, wrote in an e-mail. Azure's mobile services have been significantly advanced with this offering, and the API services "are an important and trendy new capability that developers and enterprises are clamoring for these days."

The second package, Mobile Apps, can be used for building native mobile applications for Windows, Apple or Android devices. It works with cross-platform development technologies such as Xamarin and Cordova. Azure can handle common tasks for running mobile apps such as push notification, storage, synchronization and authentication.

The Logic Apps package can help developers automate business processes across different cloud and in-house applications. This service is based on Microsoft's BizTalk service for enterprise application integration. "It is a flow-based automation tool," Khan said.

The API Apps component is designed to provide an easy way to create cloud-based APIs (application programming interfaces) for third party applications. It also eases the work of incorporating third-party applications into Web and mobile applications, according to Microsoft. The service has built-in support for connecting with enterprise software applications such as SAP, Siebel, and Oracle's business software. Connectors are also available for a range of Internet services provided by Salesforce.com, Zendesk, Dynamics CRM Online and others.

Web Apps is currently available, and the other services will be made available later this year, Khan said. The cost will be based on per-minute usage.

Also this week, Microsoft released a software development kit (SDK) for those programmers concentrating on Windows' next version, Windows 10,