Rights groups slam as weak draft EU rules meant to increase transparency on use of 'conflict minerals,' used in computers and electronics 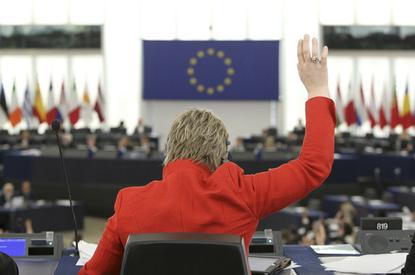 Vote in the European Parliament

The EU needs to impose stronger disclosure requirements over companies whose products contain materials from African mines controlled by warlords. Those companies include makers of computers and consumer electronic products.

That's the message from human rights groups unhappy with proposed EU rules meant to inform consumers about these "conflict minerals" and reduce their use in products such as laptops and tablets. The bill proposes to set up a voluntary self-certification system to encourage companies to be more transparent about their supply chain and source their minerals responsibly.

The proposed EU rules are too weak to have a meaningful impact and they apply to a narrow scope of companies, and thus will fall short of their goal to increase supply-chain transparency, the groups said Monday.

The European Parliament is set to vote on a draft law on Wednesday intended to stem the flow of revenue to armed groups in Africa from sales of conflict minerals. Warlords exploit miners and use the vast profits to fund their hostile campaigns.

The proposed law seeks to make some companies be more transparent about their use of tin, tantalum tungsten and gold -- minerals that are often used in the production of laptops, smartphones and tablets.

Tungsten for instance is used in the production of integrated circuits while gold is used in high-end wiring such as audio or USB cables. Tantalum meanwhile is a rare metal that is used in the manufacturing of mobile phones and computers because it makes good capacitors, and tin can be used as solder.

But Members of the European Parliament (MEPs) were urged in an open letter signed by over 150 groups to amend the bill so it would require more companies to be transparent and reveal more details about their supply chains. It is time to seize this opportunity to finally tackle the trade in conflict minerals and ensure that European companies do not benefit from and contribute to human rights abuses, they said.

The mining and trade of the minerals is problematic and continues to perpetuate a cycle of conflict and human rights abuses in many fragile areas of the world, according to the groups, which include Amnesty International, the Ethical Consumer Research Association and Global Witness said. The current proposals would leave Europe lagging behind global efforts, including mandatory requirements set by the U.S. and by twelve African countries.

Since August 2012, the U.S. Securities and Exchange Commission (SEC) has required that publicly-traded tech companies disclose if they used minerals that originated in the Democratic Republic of Congo or adjoining countries.

Meanwhile, the European Commission in March 2014 proposed a law that would make it entirely voluntary for importers of the four minerals to start sourcing them responsibly and disclose their efforts to do so, the groups said.

In April of this year, the European Parliament's International Trade Committee voted to apply some changes to the draft, proposing mandatory transparency rules that would apply only to about 20 smelters and refiners that import raw materials.

But this proposed change would still let the vast majority of companies importing products containing these minerals entirely off the hook, the groups said.

Meanwhile, MEPs have filed hundreds of amendments in an effort to make transparency rules binding for companies importing consumer electronics and semi-finished products, said Judith Sargentini, MEP for the Greens.

If the amendments are adopted, not much would change for tech companies that are publicly traded in the U.S., which must comply with the SEC requirement, unless they have separate supply chains for the EU and the U.S. However, European tech companies like Philips and Ericsson would be required to reveal more about their supply chain, as would the European automotive industry, which has been actively lobbying against mandatory transparency rules, Sargentini said.

While a vote in a Parliament committee is often a good indication of how the vote will go in the plenary, this time it's going to be a close call, she said. "The pressure on colleagues has been increased lately and I cannot predict which way it will go."

The Parliament will debate the issue on Tuesday before the vote on Wednesday. After the vote, the draft will still have to be negotiated and approved by the Council of the EU, the EU's third legislative body that consists of EU country ministers.