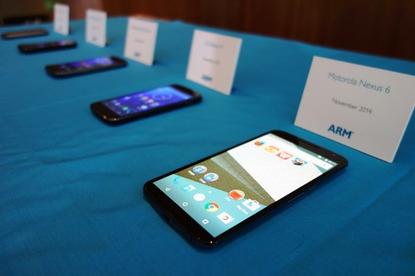 Heated competition in the smartphone and tablet markets has required chip makers to speed up the pace at which they release new processors, the CEO of ARM said in an interview this week.

Following in the footsteps of Apple, rivals like Samsung and HTC are upgrading their flagship devices on a near yearly basis, adding better displays, faster chips and more memory to entice customers into buying their products.

ARM designs the microprocessors used in most of those devices, and the increased competition means it's having to push out faster, more power-efficient chips at a quicker pace, CEO Simon Segars said Tuesday.

"We're always going to be looking to deliver more performance, make the best use of manufacturing technology ... and deliver better system-wide efficiency," he added.

ARM creates chip designs that it licenses to other companies such as Samsung, Apple and Qualcomm, who then tweak those designs for use in phones and tablets. A report last week said ARM is making rapid progress on its next major processor design, which could turn out to be the quickest design upgrade it's yet produced.

The new chip could be rolling off production lines by the end of next year and appearing in mobile gadgets soon after that, according to the report, from The Linley Group. That would mean it arrives just a year after its predecessor, the Cortex-A72, which was announced in March and is expected in devices at the end of this year.

The A72 also arrived sooner than expected, but it was a much-needed upgrade to its predecessor, the Cortex-A57. That chip was announced in 2012 and took two years to find its way into mobile devices -- perhaps twice as long as the current chips.

Segars declined to comment on specific plans for the newest chip, but he acknowledged that ARM has been accelerating its design efforts. That's possible partly because ARM has more CPU designers than it had in the past, he said.

Beyond the CPU itself, ARM is looking at ways to improve memory and to speed up data exchange between components, he said.

ARM's yearly upgrade cycle mirrors that of Apple, which releases new A-series chips for its iPhones on a similar 12-month schedule. Apple's new chips typically include upgrades for the CPU, connectivity and graphics components.

The tech industry has grown accustomed to the pace at which vendors upgrade PC lines, which happens every year to 18 months. ARM is meeting the demands of a smartphone industry that's heading toward a cycle of six months to one year, said Dean McCarron, principal analyst at Mercury Research.

The faster refresh cycle is the fruit of investments ARM made a few years back to help it stay ahead of Intel, its primary competitor, McCarron said. Intel's smartphone chips are used in only a few handsets, but two years ago the company said it would upgrade its mobile chips faster in an effort to break ARM's dominance.

Intel year released new Atom chips code-named Merrifield and Moorefield, and earlier this year it shipped chips code-named Sofia for low-end smartphones. The Sofia chips were made in conjunction with Chinese company Rockchip, which has experience turning around processor designs in a matter of months, McCarron said.

Next year Intel will ship a high-end Atom chip called Broxton, which has a modular design that allows Intel to modify the chip and deliver updates at a faster pace. Broxton supports Intel's larger plan to deliver products that can be customized more easily, making its model more similar to that of ARM.

For now, the intense competition has resulted in new chips coming to market more quickly, but designing and manufacturing chips is a complex business, and it remains to be seen how long the yearly upgrade cycle will continue.