The Chinese PC vendor is pulling more revenue from smartphones, tablets and servers 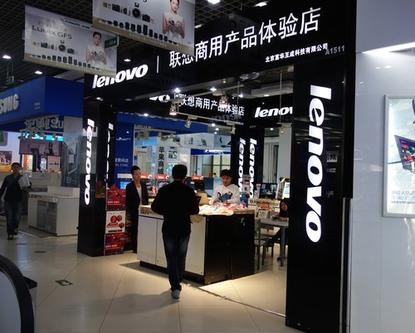 In the U.S., you won't find one single Lenovo store. But walk around anywhere in China, and chances are you'll come across one of its 18,000 retail outlets in the country. The company's presence can especially be felt in Beijing, where Lenovo shops and company advertisements can be easily found across the city.

Lenovo's recent acquisitions have taken a bite out of the company's earnings, with its net profit in the first quarter dropping 37 per cent despite strong PC sales.

The Chinese company paid $US2.9 billion for Motorola Mobility and $US2.1 billion for IBM's x86 server business. Prior to the acquisitions, Lenovo typically reported strong earnings on continued PC demand in its home market.

During the quarter, Lenovo's net profit was $US100 million, down from $US158 million a year ago. Revenue, however, hit $US11.3 billion, up 21 per cent year over year, the company reported.

To fuel its future growth, the company has been expanding into mobile devices and the enterprise sector. Its purchase of Motorola Mobility, for example, will give Lenovo an instant foothold in smartphone markets such as the U.S.

The Motorola purchase has made Lenovo the world's third largest smartphone vendor, behind Apple and Samsung, according to research firm IDC. But the company still faces the challenge of making its smartphone business profitable.

Its business in smartphones, tablets, servers and other products now accounts for 37 percent of its revenue, the company said in its earnings statement. That figure is up from 17 percent points a year ago.

PCs, however, still remain the company's main business. It ranks as the world's largest PC vendor. During the fiscal year ended March 31, Lenovo shipped 60 million PCs, a new record for the company, and it has been steadily growing its market share in the US.