The Upload: Your tech news briefing for Tuesday, May 26 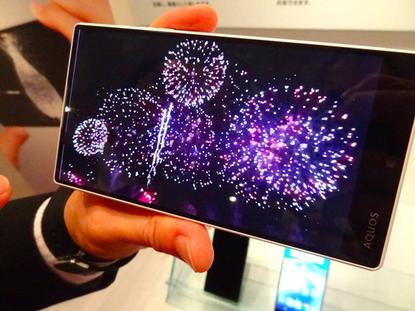 A Sharp smartphone plays slow-motion video with a high frame rate at a demonstration in Tokyo on May 25, 2015. Sharp says its latest Aquos phones with the feature have the highest rates for slow-motion video.

Charter Communications will spend US$55 billion to buy Time Warner Cable in a deal that would create a broadband powerhouse in the U.S., the Wall Street Journal reports. Comcast's bid to buy Time Warner fell apart last month when it became clear that key regulators in the U.S. were opposed. Expect Charter's plans to be closely scrutinized for their impact on competition, as well.

The British design genius who partnered with the late Steve Jobs to create some of the most iconic products in tech is moving up into a newly created executive role at Apple -- and one that will likely have him in a less hands-on role, re/code reports. Jony Ive was named chief design officer, a role where he'll focus on new ideas and future initiatives, while day-to-day oversight will fall to Richard Howarth on industrial design and Alan Dye on user interfaces.

Electronics maker Sharp is showing off smartphones that can shoot and play back video with a smoother slow motion effect. At a Tokyo press conference on Monday, Sharp officials played video on the new Aquos phones that showed water droplets and fireworks exploding in extreme slow motion.

With the U.S. Senate unable to agree on a bill that would have given the NSA continued authority to collect Americans' phone records, members of the lower House, which crafted and passed the USA Freedom Act, are working through the holiday week ahead to tweak it just enough to satisfy Senate holdouts. Three more senators are needed to approve the new legislation that would end the NSA dragnet and instead leave carriers holding all call metadata, which the government could access via search warrant, the New York Times reports.

Cybercriminals have developed a Web-based attack tool to hijack routers on a large scale when users visit compromised websites or view malicious advertisements in their browsers. The attacks replace the DNS (Domain Name System) servers configured on routers with rogue ones controlled by attackers -- and that allows hackers to intercept traffic, spoof websites, hijack search queries, inject rogue ads on Web pages and more.

It's not just the transport business that's being hit hard by a nationwide fuel distribution crisis in Nigeria: MTN, which has 61 million mobile phone customers in the country, is running low on fuel and has said its network will be significantly degraded if it doesn't receive more supplies by Tuesday, Bloomberg reports. Bharti Airtel also warned local customers of service problems. Uber already said its cars in Lagos have been slowed down by the gas shortage; if customers can't summon them via their mobile apps, that will compounds the startup's woes.

Amazon may go up against artisan marketplace Etsy

The online market for handmade goods seems to have caught Amazon's eye: a questionnaire posted on the company's website suggests that it's considering a marketplace focused on artisan products, likely to be called, simply, Handmade. That would put the online retailer directly in competition with Etsy, where 1.4 million active sellers push 32 million handmade items, vintage goods and craft supplies. Don't cry for Etsy: it lost its indie cred years ago when it loosened rules about what kinds of products were allowed to be sold on the site.

A brain implant allowed Erik Sorto, paralyzed from the neck down for 13 years, to take a sip from a bottle of beer using a robotic arm controlled by his mind.

Mobile technology can be liberating in many ways, but in Saudi Arabia it provides women and the young a measure of escape from a repressive society, the New York Times reports.