Keep your legacy management style out of the Cloud, Intuit exec says

At the O'Reilly Velocity conference, Intuit advised to go all in on cloud-native tools and don't worry about lock-in 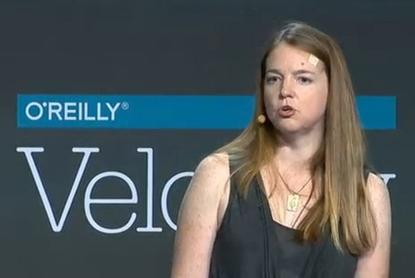 If you're moving into the Cloud, check your legacy management style at the door.

That's the advice from a director of operations at Intuit, one of the largest providers of hosted cloud applications, in a talk Thursday at the O'Reilly Velocity conference in San Francisco.

"Your legacy management patterns [can] bleed over into your cloud environment. This is something to guard against," said Dana Quinn, Intuit's director of application operations.

Intuit is one of the largest cloud application companies, offering hosted services for tasks such as managing finances and preparing income tax forms. The company generates over $US4 billion in annual revenue, about two-thirds of which comes from mobile and hosted services, Quinn said.

Intuit began using the cloud use as a way for its developers to more quickly build and test applications. The load testing has been particularly important, as the company's tax services get huge spikes in traffic each April, when US tax returns are due.

"An engineer can substantiate an environment very quickly and test against that. More importantly, after a few hours of non-utilization, we can spin down these environments very quickly, and save a lot of money," Quinn said.

One decision Intuit had to make was whether to adopt the development and management tools it was using in-house, or go with Cloud-native tools. Quinn didn't say which tools Intuit was using, but he said the best choice was to go with those designed for the Cloud.

"We chose Cloud-native. We wanted to avoid things that added friction on the cloud side. We felt that Cloud native toolsets give the most direct access to the Cloud provider's capabilities," he said, noting also that new hires tend to be more familiar with the Cloud tools.

One concern Intuit struggled with was vendor lock-in. If it put all of its services on a single Cloud, and relied on the custom features of that cloud, would it be overly reliant on the provider and unable to move to another service? Intuit felt comfortable enough with Amazon to go ahead.

"This is a risk we are willing to take. We felt we made a good choice with our vendor and we do re-evaluate every few years to make sure we are still good with that choice," Quinn said.

The company did have to change the way it manages its IT resources, however. The Cloud requires new metrics, Quinn advised.

One important new metric has been the lifespan of a virtual machine, as running virtual machines are billed on an hourly basis with most providers. This was not a metric the company tracked in its own data center. "There was no point," Quinn said.

"Your engineers aren't used to tracking their spending. You have to remember to shut the Cloud off," he said. One approach Intuit has used is to let the management and development teams be in charge of their own Cloud spending. This gives them the incentive to use the Cloud more efficiently.

"The elastic capabilities have made our hosting dollars go further," Quinn said.