The Upload: Your tech news briefing for Monday, June 1 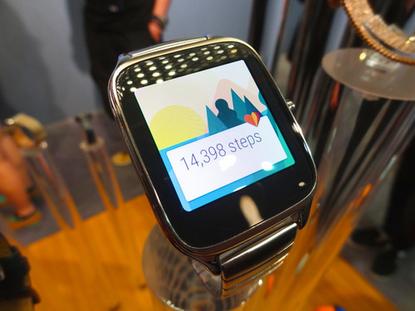 The ZenWatch 2, shown off on the fringes of Computex in Taipei June 1, could feature a four-day battery.

Once again, reports have Intel near a deal with Altera

Intel may announce a deal to acquire FPGA maker Altera on Monday, the Wall Street Journal reports, after the two companies returned to the bargaining table following a failure to come to terms earlier this year. The buy would strengthen Intel's already dominant hand in the server market at a cost of about $17 billion.

A controversial program allowing the U.S. National Security Agency to collect millions of domestic telephone records expired Sunday night after the Senate failed to vote on a bill to extend the authority for the surveillance. But senators moved closer to bringing the USA Freedom Act to a vote; that bill gives the agency limited power to obtain data on American residents under investigation. Some are still calling for more reform and better oversight.

Asus ZenWatch 2 could keep on ticking for four days

Asus showed off a preview of its next-gen smartwatch on the sidelines of Computex, and one of the highlights is a battery that could keep the device charged for up to four days. That's four times the staying power of the Apple Watch, whose design Asus echoes with the ZenWatch 2: It incorporates a metal crown and is designed to be a fashion accessory available in 49mm and 45mm sizes to suit men and women.

ARM is trying to resolve the thorny problem of battery life in Internet of Things devices with a new chip design that will significantly reduce the power consumed by processors, sensors and wireless chips. A design overhaul of low-power Cortex-M chips could almost double battery life, ARM executives said at Computex.

Microsoft's much-hyped new OS will be available on July 29, the company said in a blog post on Monday. Over the weekend, online retailer Newegg.com tipped its hand to show some Windows 10 pricing as it began taking pre-orders, Computerworld reports. The listings were for versions aimed at homebrew PC makers and those who want to run the OS in a virtual machine or in a dual-boot configuration, and showed the consumer version at $109.99, and the professional version at $149.99.

Woman unwittingly recycles an Apple I, is owed $100K

A woman who dropped an Apple I at a Silicon Valley recycling center in April has $100,000 coming to her if she steps forward, the San Jose Mercury News reports. When the recycling firm went through the boxes she left, it discovered the vintage computer, which is one of 200 put together by the Apple founders in 1976. It sold it for $200,000 to a private collection, and now the center wants to give the mystery donor half of those proceeds.

If you let your older Mac go to sleep rather than shutting it off when you walk away, you may be leaving it vulnerable to an attack that could modify the system's firmware, a security researcher says. Pedro Vilaca found it's possible to tamper with an Apple computer's UEFI (Unified Extensible Firmware Interface) on MacBooks made prior to mid-2014, because the UEFI code is unlocked when the system awakens from sleep mode.

Review the past week's tech news on The Wrap: Google outlines its home automation strategy, the FCC wants to stop robocalls and Solar Impulse 2 is stuck in China.

Automotive information systems that display on your windshield promise to keep your mobile phone out of your hands while driving. But do they distract you even more?