Siri can be used to issue many commands, but unlocking doors isn't one of them 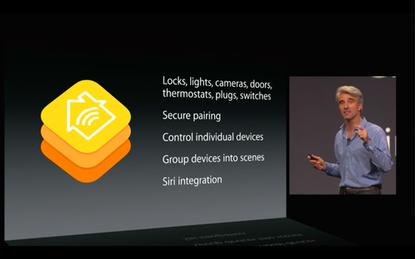 One of the many new developer tools Apple unveiled Monday at the Worldwide Developer Conference is HomeKit, a new suite of tools that will let the makers of smart home products integrate their wares more deeply into Apple’s mobile OS.

People looking to control their HomeKit-compatible devices when they're away from home will need an Apple TV to complete those tasks, Apple revealed in a support page for its smart home platform.

Via a third-generation or later Apple TV running at least software version 7.0, iOS devices can be used to remotely control HomeKit-compatible products.

As long as the same Apple ID is used to log in to the iOS device and Apple TV, people can speak commands to Siri to control HomeKit-compatible products. For example, people can ask Siri to turn off a light or set a thermostat to a certain temperature. However, Siri commands can't be used to unlock doors, and users may need to unlock their iOS device to use Siri with some HomeKit appliances.

Any iOS device running iOS 8.1 or later, and any HomeKit certified product, will work with the platform, Apple said. To connect to a HomeKit accessory, people should first download the product's app from the App Store. Next, they need to enter the product's setup code into the app.

Apple noted that some apps will allow people to group accessories together. This would permit a person to use one command to control several devices at once, like switching on all the lights in a living room, for example.

In September 2014, media reports claimed an Apple TV software update had added HomeKit support and essentially turned the set-top box into a smart home hub. However, the update's documentation didn't contain any details on this feature. Apple TV's role as a hub wasn't confirmed until Wednesday, when the company added HomeKit support information to its website.

These new details on HomeKit come a day after vendors shared when the first batch of devices that work with the platform would go on sale.

After announcing HomeKit last June at its developer's conference, Apple hadn't talked much about the platform, which serves as a backbone for connecting household devices, until this week. HomeKit also provides developers with a framework for building mobile apps that can control accessories. In May, Apple denied reports that it was delaying the rollout of some HomeKit devices from June or July until August or September.

On Wednesday, Apple also added a page to its website that lists the accessories that are compatible with HomeKit. Presumably, Apple will add to the list as more devices become available.