Google-owned Nest unveils a smart camera for the home 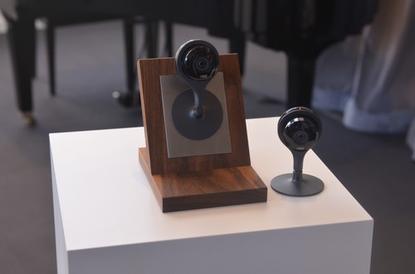 Nest Labs, Google's home sensing unit, made its long-awaited move into the home security market on Wednesday when it unveiled Nest Cam.

Nest Cam is based on technology acquired last year when Nest purchased Dropcam. In fact, think of Nest Cam as a very much improved and souped up version of the first generation Dropcam.

It will shoot video at full 1080p high definition -- higher than Dropcam's 720p -- and is said to be able to better distinguish between different forms of movement in videos and send more relevant alerts to users when something happens inside their home. It's slimmer than the Dropcam, has better night vision, and a tripod mount.

It costs US$199 and is available in seven countries including the U.S., Canada, and parts of Europe like Germany and the U.K.

During an event in San Francisco on Wednesday, the company also unveiled a new model of its Protect smoke alarm and carbon monoxide detector, which will detect fires quicker than the first generation model, according to Nest. It costs $99 and will ship next month.

During the event, Nest also unveiled a new mobile and desktop app that will let people control all their Nest devices. With the addition of the Nest Cam, the company now has three products, including the Nest Protect and Nest thermostat.

The products are part of a handful of Internet connected devices gathering potentially sensitive data that fall under Google's umbrella.

But Google will not gain any data unless users authorize it, said Greg Hu, Nest's senior product manager and head of its developer program, during an interview following the announcements. That authorization, announced last year, allows a variety of third-party services, and Google services, to interact with Nest devices.

Google paid more than US$3 billion last year to acquire Nest, sensing a budding market around the so called "smart home."

After Google bought Nest, Nest paid $555 million to purchase home camera maker Dropcam, which sells a camera that also streams live video over WiFi to users' mobile devices and desktop computers. Many users already rely on Dropcam's cameras to monitor their home when they're not there.

Other players like Samsung have made their own moves to tackle the still young market.